Oh no! Don't make me pay 11 cents more so that people can have preventative care! Think of the children! (Image courtesy of Jon Sullivan via pdphoto.org)

What is it about fast food companies and ridiculous right wing grand standing? First we have Chik Fil A becoming the fried poultry vendor of choice for homophobes, now we have Papa John's claiming that they're raising prices to pay for Obamacare. Yes, the same pizza chain that pockets a $2 delivery charge and still expects you to tip the driver.

This week, Politico.com reports that, in a recent conference call to shareholders, Papa John's CEO John Schnatter said that his firm will have to raise the price of a pizza by between 11 and 14 cents. Break out the smelling salts, because having a guy who made a fortune out of selling cheese-covered bread is lecturing us on health care. This is like having Paula Deen lecture you on how to treat diabetes (wait, what?)

Politico noted that Schnatter is a Mitt Romney supporter, so personally I feel that the cost of the conference call might be classified as an in-kind contribution to the Romney campaign.

And there's a good trace of baloney amongst Schnatter's salami. He, as does all the GOP #fullrepeal goon squad, keeps ignoring two basic facts. One, America's health care market (as one doctor told me, it's definitely not a system) is utterly dysfunctional. Two, that the current public health network depends on two habits. First, people staying ill and turning up at the emergency room (the most expensive way to treat what could have been cured with preventative care.) Secondly, people being so afraid of the cost of medical care that they just die from treatable diseases.

But what about that $2 delivery charge? In 2005, Papa John's told the Baltimore Sun that "Our restaurants have felt the pressures on the food-cost side due to the higher ingredient costs related to fuel." Now, if that were true, then it would affect the price of all pizzas, not just the ones delivered. And there are dozens of pizza delivery message boards dedicated to the fact that the delivery drivers haven't benefited from that price raise, and instead have seen their tips go down. After all, why pay a tip when you're paying a $2 plus tax delivery charge?

And let's look at this terrible price hike (yawn.) Let's take the cheapest pizza they sell, a $7 eight inch original. An 11 cent raise is equal to a 1.5% price increase, and works out at under three cents a portion (yup, an eight inch pizza is supposed to serve four people.) Now the most expensive pizza, the extra large original double bacon 6cheese, priced at $17. Now even with the highest raise that he proposes of 14 cents a pizza, that's now less than 1% increase, or 1.5 cents per portion.

Think about that. Schnatter, and everyone who Tweeted their support for him, thinks that saving 11 cents on a pizza is a greater moral good than, oh, not denying health coverage to kids who beat cancer. Hey, cheer up, John: Maybe the 12.8 million Americans who got an insurance rebate check, and are no longer being gouged on 'overheads,' can cover that 11 cents.

East Side Pies, anyone? 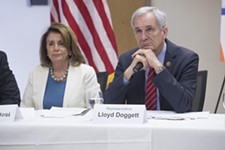 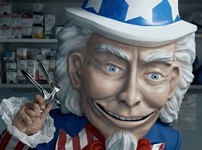 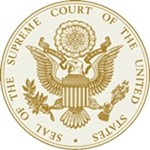 Supremes Take on Healthcare, Pt. 3
Final day of arguments done and over