Not So Tone Deaf? 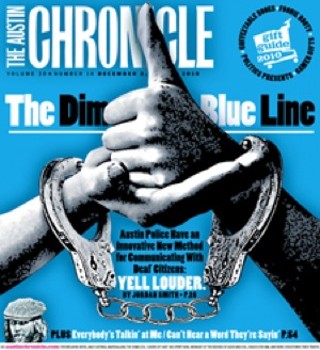 For the second time in a decade the city of Austin has settled a federal civil rights suit, reaffirming its agreement to provide training for Austin Police officers on how to effectively communicate with Austin's deaf population, including how to obtain interpreters to ensure effective communication as required by the Americans with Disabilities Act.

The lawsuit was brought by the Texas Civil Rights Project on behalf of Esther Valdez, who is deaf and who was arrested in 2009 for resisting arrest after failing to hear an officer yelling at her to stop walking down a sidewalk along a busy street in North Austin. The story of Valdez's arrest was featured in a cover story in the Chronicle in December 2010. The charges against Valdez were eventually dismissed, but last year she filed suit against the city and against Travis County, arguing that the two entities discriminated against her based on her inability to hear. (The suit was initially filed ins state court but was removed to federal district court in July 2011.)

In settling the suit the city has not admitted any fault, but has agreed to a list of accommodations it will make for the hearing disabled. In addition to reaffirming it's commitment to training new APD recruits in how to effectively communicate with the hearing disabled – a commitment the city originally made in 2002 in settling a case brought by a blind-and-deaf couple after they were arrested at the Catfish Parlour in 2000 – the city has agreed it will require one hour of refresher training for all officers every two years, "including a review of APD's operational policies and procedures on communicating with persons with hearing disabilities and instructions on how to obtain a sign language interpreter and other auxiliary aids and services," reads the settlement. Moreover, the city has agreed to install videophones within APD's holding room at the jail and at the municipal court in order to ensure that detained individuals with hearing disabilities have the same access to telephone communication as do hearing individuals who are detained by police.

The settlement also calls for the posting of a simple sign in the jail holding room, in the municipal court, and in the magistrate courtroom within the county's Blackwell-Thurman Criminal Justice Center that informs the hearing disabled that they need only to point at the sign to indicate that they are hearing impaired and in need of interpreter services. (The city also agreed to pay TCRP's attorney fees and to pay Valdez $500, a nominal penalty allowed under the law.)

Valdez is pleased with the settlement, said TCRP attorney Joe Berra. He said the city was very open to making the kind of changes necessary to ensure fair treatment of hearing impaired individuals involved with the criminal justice system. The changes, he said, will ensure that the system "identifies the needs" of the hearing impaired right away. "We are happy with the agreement," he said, and with the city's "proactive" approach to handling the lawsuit. Berra acknowledges that the city has been down this road once before, agreeing to train police and to ensure effective communication for the hearing impaired, but that the changes didn't prevent future issues – such as in Valdez's case. "Perhaps this time around it will penetrate the institution more," he said. "Hopefully, it will stick this time."