More of an Idea About IDEA 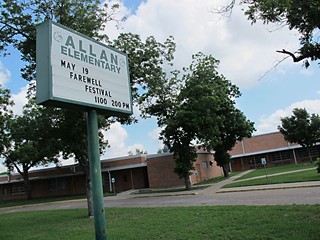 One of the biggest frustrations about IDEA Allan (apart from it looking like Austin ISD's push for backdoor privatization of public education) is that parents were forced to sign up or drop out before they knew what they were getting. Now IDEA Public Schools has clarified some details, including their contentious library plans.

The community at large has felt extremely unhappy (and that's being generous about the way the closure of Allan has been handled, but there are two points of concern that may make them feel a little less in the dark.

First, that IDEA Allan will keep the Allan Bulldog as its mascot. That may seem like a small step, but AISD has not always paid this much attention to alumni and community loyalty and sense of identity. Then again, considering how many Allan attendance zone residents have rejected the campus, this may be a Pyrrhic victory.

Second, something that some may take as a small policy reversal. Parents had been told by multiple sources within the district that IDEA Allan would stop the old habit of allowing parents to visit the campus and have lunch with their children: According to IDEA senior communications director Vanessa Barry, that decision had not been made until the principals were selected, and they had decided that tradition will now continue. She wrote, "I'm not sure where parents would have heard the message that it was firmly decided one way or another."

However, many parents and educators were extremely concerned about the lack of a real, traditional library in IDEA Allan (the old one was disassembled, its books distributed around the district and its shelves relocated elsewhere within Allan and other campuses.) IDEA had promised something 'library-esque' and now there are some details about the Accelerated Reader Zone. The facility, which will combine books, periodicals and data bases (because that's what elementary school students really need) will plug directly into classroom process. Barry writes that it "is a component of BetterIDEA, IDEA Public Schools' curriculum model, which provides 2.5 hours a week in a reading-based lab." BetterIDEA is part of IDEA's controversial and unproven push to direct instruction (shorthand for computer-based learning with constant built-in assessment.) Books are allocated by reading level, and when the student has read it they will be "tested for competency."

Now if that sounds like a whole heap of fun that will fill kids with the joy of reading, worry not. Barry adds that students will also have access to the AR Zone for "recreational purposes, functioning like a traditional library would."

AISD to Consider Charters and Communities Tonight
Agenda a complex dance between trustees, neighborhoods and employees