Key evidence missing and no one knows why 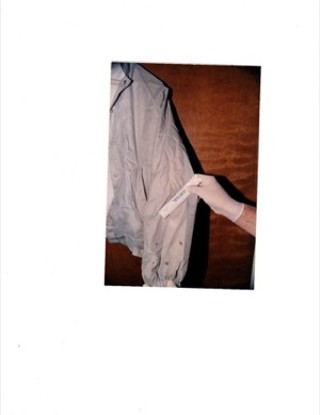 The windbreaker in question

Just two weeks after the state announced it would drop its opposition to the post-conviction DNA testing of evidence in the capital murder case that sent Hank Skinner to death row, comes news that at least one piece of evidence Skinner has been seeking access to for testing has been lost.

Among the key pieces of evidence never before tested, and that Skinner has sought access to for more than a decade, is a blood- and sweat-stained windbreaker found near the body of his girlfriend Twila Busby. The windbreaker is now apparently missing. "We are pleased to have reached an agreement that finally secures DNA testing in this case, but there remains reason for grave concern," Skinner's attorney Rob Owen said in a press statement. "According to the State, every other piece of evidence in this case has been preserved. It is difficult to understand how the State has managed to maintain custody of items as small as fingernail clippings, while apparently losing something as large as a man's windbreaker. To date, the State has offered no explanation for its failure to safeguard the evidence in this case."

Indeed, in addition to 40 items of evidence that have never before been tested for DNA is the windbreaker found next to the body of Busby, who was slaughtered along with her two sons, in the Pampa home she shared with Skinner. There are photos of the windbreaker, a tan jacket with snap buttons down the front, but the windbreaker itself has disappeared – and no one seems to know how or when it was misplaced, or where it might've gone. The Gray County Sheriff's Office says it has never had custody of the jacket; Gary Noblett, from the Pampa Police Department, a 41-year law enforcement veteran who now manages the department's evidence, says that everything the Pampa PD had stored as evidence in the case was eventually transported for Skinner's original trial. After Skinner was convicted the evidence was moved back to Gray County, he said, but "somehow or another" the windbreaker never made it back. He says the PD has fielded questions about the missing windbreaker for three or four years – at some point including questions from the AG's office – but "as far as I know, no one's ever been able to find that thing."

The AG's office did not immediately respond to questions about the missing jacket, or about how long they've been aware that it is missing.

Busby and her two sons were slaughtered in 1993. Skinner has long claimed he is innocent of the crime; he admits he was in the house the night the family was slaughtered, but says he was knocked out by a cocktail of booze and prescription drugs and awoke to find the carnage. Skinner maintains that the circumstantial case against him could be discredited through DNA testing of multiple items of evidence not tested before his 1995 trial – including vaginal swabs and fingernail clippings taken from Busby, two knives found in the home (one on the front porch, the other in a black plastic bag that also contained a dishtowel), and various blood-stained items (door knobs and molding) collected from the crime scene. The windbreaker is also key to Skinner's story, says Owen, because a witness in the case has identified the jacket from a photo as a jacket that belonged to, and was "regularly worn by," Busby's uncle Robert Donnell who had been seen stalking Busby at a party shortly before she was killed.

Nonetheless, the state had objected to the post-conviction DNA testing, arguing before the Court of Criminal Appeals last month that to allow the DNA testing now would be to incentivize defendants charged with capital murder, and facing the death penalty, to delay DNA testing at trial in order to have grounds for a post-conviction death row appeal. That argument did not seem to impress the generally state-friendly CCA and less than a month after the hearing the state reversed its course to agree that, in the interest of justice, Skinner should be allowed access to DNA testing.

The joint motion, filed June 12, includes details of how the evidence testing should proceed; all evidence is to be transported to the Texas Department of Public Safety lab in Lubbock, where it will be inspected by lawyers for both parties before any testing begins. Any unknown DNA profile found as a result of the testing will be run through state and national databases, if possible, and followed by the issuance of a report by DPS documenting the test results and DNA comparisons. Forty-five days after all of the data has been reported to the parties a hearing on the matter will be held in Gray County.