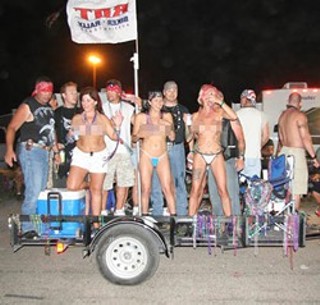 The ghost of ROT Rallies past (Courtesy of Anonymous Taxpayer)

Lock your bike, don't drink and ride, and make way for the procession.

Those are among the recommendations coming from the Austin Police Department in preparation for the annual Republic of Texas Biker Rally, coming to town this weekend.

Festivities start on Thursday night, with the partying getting up to speed on Friday. Notably, that's also when the no refusal weekend begins: that means getting popped for drinking and driving will likely end in a needle prick.

Also, the annual motorcycle procession from the Travis County Expo Center will begin at 8pm Friday, June 8, which means motorists should be on the lookout not only for a horde of bikers, but also for street closures and traffic delays along the route, including the closure of Congress Avenue between Cesar Chavez and East 11th Street. Click here for the full list of street closures.