A unanimous Texas Supreme Court ruled today that Michael Arena, sent to prison for an alleged sexual assault that even the victim says never happened – is entitled to a new sentencing hearing.

Arena and his brother, John, were each accused as teens of sexually assaulting their young cousin, Stephanie Arena, when the girl was just seven-years-old. Stephanie soon recanted, however, and has been adamant that she was coerced into accusing her cousins at the behest of her mother, who was in a bitter divorce from her husband and had illegally removed Stephanie and her brother from Texas in violation of a court order. You can read the entire back story here.

At trial, the state called Williamson County psychologist and sex offender treatment provider Frederick Willoughby who said he could tell, based on having administered to Michael Arena the "Abel Assessment," that the teen was a pedophile with a particular interest in young girls Stephanie's age.

The problem with Willoughby's testimony, however, was that it did not accurately reflect that the Abel Assessment, a test to predict pedophilia, was not validated and was not meant to be used on juveniles. Although prosecutors specifically relied on Willoughby's assessment at trial in arguing to jurors that Arena should be locked up (instead of given probation), they have insisted on appeal that Willoughby's misleading and inaccurate testimony most certainly had no impact on what those jurors finally decided, which was to pitch Arena to prison for 20 years. (Indeed, Willoughby was later disciplined by the state psychologist licensing board for failing to substantiate his in-court opinions.)

The Supremes, however, disagreed and found today that Arena is due a new punishment hearing that excludes the false testimony provided at his original trial. "Given the evidence regarding the Abel Assessment's application to adolescents, had Willoughby testified truthfully, the State would not have established the assessment's reliability," Justice Eva Guzman wrote for the court. "Therefore, we hold that the trial court would have excluded Willoughby's testimony." Moreover, the court found, contrary to the state's position, that the false testimony likely did "contribute" to the jurors' decision to sentence Michael Arena to a lengthy term in prison.

Although the court seemed sympathetic to Michael Arena's innocence claim during a January hearing, it declined to rule he could legally prove his case. Because a lower court's finding that Stephanie's recantation was not credible "has some support, we cannot grant [Arena] relief on his actual innocence claim," wrote the court.

The case will now be sent back to Bell County for a new punishment hearing – and it seems likely that Arena will, at long last, be headed home. 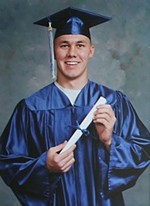 Arena Gets Time Served
After Supreme Court ruling, won't have to register as sex offender