Meet The New Council, Same as The Old Council 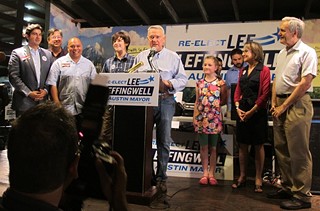 We just got word from Mayor Lee Leffingwell's campaign: Challenger Brigid Shea has conceded, sealing a clean sweep for the incumbents in this low turn-out but highly volatile council election.

On election day Shea put a dent into Leffingwell's early voting lead. But ultimately, he still finally scooted over the line with 52.06% of the votes cast, a clear 15% win over his leading challenger.

Bar a seeming numerical impossibility (especially since those outstanding boxes are small ones in Hays and Williamson Counties), he was comfortably out of the danger zone for a run-off as he took to the stage at Scholz Garten a little after 10pm. The results were not final, but with with 217 of 237 precincts reporting, Leffingwell was sitting on 52.08% of the 48,199 votes cast, making a victory speech a safe gamble. Introduced by his son and flanked by Council Member Mike Martinez, and Austin Democrats Rep. Eddie Rodriguez and Congressman Lloyd Doggett, he thanked his campaign staff and the voters. His speech was an unapologetic recommitment to the policies that Shea had hit him on: F1, convention hotels, et al.

He even thanked Shea who, at that point, had yet to make a concession phone call, even though she still languished on 37.16%. It seems clear that she was waiting on the final results, to see whether she could keep biting into the mayor's lead, while hoping that Clay Dafoe could rustle up enough Ron Paulites to push him into the mid-teens. Instead he sputtered out, dropping below 11% and failing to create a run-off scenario. According to Leffingwell's campaign, Shea finally called at around 10:30pm, after Leffingwell's speech, and her tone was "conciliatory."

Elsewhere on the ballot, Martinez beat Paul-friendly stalking horse Laura Pressley by nearly ten points, while Bill Spelman overcame his chaotic seven way fight to pull in 57% (it seems that confusion broke his way, as no one challenger broke through the morass or even above the 20% mark.)

It's interesting to note that all three faced a roughly 45% protest vote: Also note that roughly 4,000 people didn't even finish the four-seat ballot, with a huge undervote in Spelman's place 5 seat. In fact, the only person who had a comfortable night was Sheryl Cole in place 6, who dominated Shaun Ireland by a better than two-to-one margin.