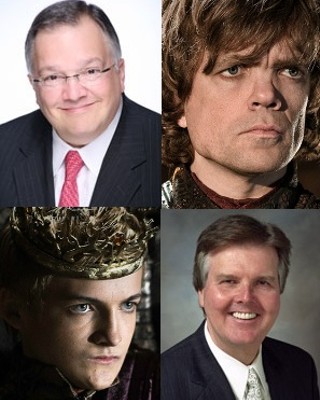 Sen. John Carona does his best Tyrion when it comes to dealing with Dan "Joffrey" Patrick (Game of Thrones images courtesy of HBO)

We've always had a lot of time for Sen. John Carona, R-Dallas, but when he calls Sen. Dan Patrick, R-Houston, "a snake oil salesman" and "a narcissist," well, our ears prick up. Especially when the cause is palace intrigue over the race to become Lieutenant Governor.

According to our good friends over at Quorum Report (hi, Harvey!) the thermonuclear meltdown between two of the Senate GOP's heaviest hitters comes in the form of a scorching exchange of emails.

The spark was a letter from Patrick to his supporters, claiming that Carona and his supporters were spreading a lie that Patrick and his wife Jan were getting separated. Patrick said that he had been told this by another (unnamed) senator, who had been approached by a political operative. Patrick wrote, "The person who was spreading this lie to them then asked if in they thought a divorce would impact Dan's chances to run for Lt Governor if I ran in 2014."

Unfortunately for him, Carona seems disinterested on letting Patrick rise to the throne by scrambling over his back. In a furious rebuttal, Carona wrote straight to Patrick: And before you ask, there was no venom left in the ink bottle. While he had heard rumors that Patrick was either gay, separated or divorced, "These are private matters between you, your family, and your minister and none of us wishes to engage in the public discussion that you have now commenced."

This was in no way a peace offering ("I've never been shy about sharing my dislike and distrust of you") but Carona went straight to the political jugular. This is nothing to do with Patrick's marriage, he wrote, but simply "your paranoia over the 2014 Lt. Governor's Race (for which you appear to have declared candidacy)."

In our heads, we're imagining this battle of wits and words being re-enacted on the set of Game of Thrones with Carona as Tyrion Lannister and Patrick skittering around as Joffrey Baratheon.

Now it's no secret that the conservative fringe hates Carona with a passion most people would reserve for war criminals and American Idol. The reason is pretty simple: Carona does not blindly follow their dogmatic rhetoric, and that's why they spent most of the last session undercutting him. All the while, Patrick has been shoved into increasingly powerful positions, much to the headscratching befuddlement of legislature watchers. The last session bears many of his hallmarks: With Lt. Gov. David Dewhurst a functional irrelevancy and the Tea Party in full effect, Patrick always seemed close at hand whenever the worst decision were made (mandatory ultrasounds? Check. voter ID? Yup. Taking a hatchet to the budget? Uh-huh.) He'd been eying a run for Sen. Kay Bailey Hutchison's vacated US Senate seat, but with Dewhurst leading in that race he set his sights and his attack dogs on the Senate presidency.

The big question is why Patrick decided to raise the fury of his supporters, rather than raise this issue with Carona mano y mano (as Sen. Judith Zaffirini, D-Laredo, asked Patrick in her own letter, "Why didn’t you contact Senator Carona, instead of accusing him before the entire Senate?") Well, could it be that the rules of the Senate mean that, if Dewhurst beats Ted Cruz for the US Senate nomination and then heads to DC, then his vacated post will be filled from amongst the ranks of the Senate. Does anyone doubt that there will be high elbows and low blows thrown in the fight to fill that post? Like, say, whisper campaigns or dog whistle-style email assaults?

Now the real question is whether Carona has now thrown his hat into the lite guv ring, and whether his dismissive tack will damage Patrick's self-appointment to the post. As the Dallas Senator told the ambitious Houstonian, "Before you rely upon gossip next time, why not just give me a call. You might avoid making yourself look silly … again."