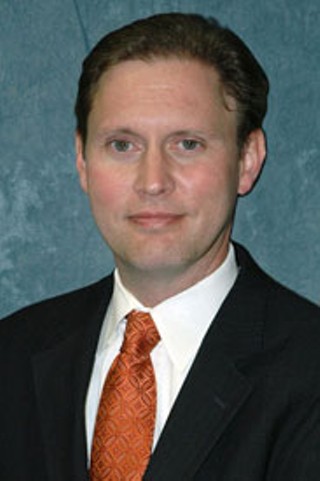 Commissioner of Education Robert Scott: Out after 18 years with the Texas Education Agency, but who's next?

Normally the exit of a state agency appointee causes nary a flutter, but not so today. Commissioner of Education Robert Scott – possibly Texas' most widely-known and controversial agency boss – is resigning his post, effective July 2.

The date will mark the fifth anniversary of his promotion to the post of interim commissioner in 2007, but he has in fact been with the agency since 1994. Back then Scott – a lawyer by training – was an assistant director of intergovernmental relations, and worked his way up through the ranks.

In a brief statement, he thanked his staff (now sadly depleted after the latest round of cuts), Gov. Rick Perry for appointing him, and "the educators who work tirelessly in our schools. I can’t thank them enough."

Patting his appointee on the back as he left, Perry issued a statement claiming that Scott had ensured "a top-notch education for our students." Perry lauded his role in establishing the Texas High School Project (last seen locally deep in the weeds on pushing IDEA Public Schools on Austin). He also suggested that Scott's achievements included "successfully implementing the state's new accountability system and working with the State Board of Education to revamp Texas' curriculum standards."

Bill Hammond, president and CEO of the Texas Association of Business, followed that up with his own faint praise. "While we didn’t always agree on policy," he wrote (i.e., Scott didn't go far enough), "I believe Robert made a real effort to always put the needs of the school children of Texas first."

However, for many, Scott's legacy as commissioner will be one of carnage. Under his tenure, financing was allowed to dwindle (not his fault, but he did little to stop it) and he oversaw the disastrously inept introduction of the STAAR test. Now his last minute road-to-Damascus-style conversion to the ranks opposing high-stakes testing, and the accompanying delay to the introduction of the 15% rule (under which the STAAR results will count for 15% of a student's graduating score) was too little, too late.

Locally, he will be remembered as the man that refused to save Pearce Middle School even when the Legislature practically begged him to do so, then tried to bury both it and Eastside Memorial by refusing to grant new PEIMS numbers and restart the accountability clock. He also got into a public feud with Austin ISD Superintendent Meria Carstarphen.

And now the worrying question. Scott had at least started to soften his views on issues like testing. With him gone, who will Perry inflict on Texas education now?