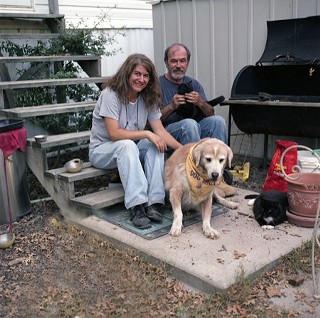 Sally Lucker with husband Geoff, Cody the dog, and cats (by Sandy Carson)

Central Texas may have lost one of its most dedicated animal rescue volunteers, but Sally Lucker’s legacy continues through Blue Paws Rescue, a non-profit organization she founded. Sally was driving to her home in Lexington, northeast of Austin, during a flash flood March 20 when her car was swept off the road into Yegua Creek on FM 1624.

She was traveling with her beloved dog Starfish. Swollen, muddy waters slowed the search process until finally, on March 22, a dive team with the Texas Department of Public Safety recovered the bodies of Sally and her dog. A celebration of Sally’s life was held March 24.

Austin photographer and Chronicle contributor Sandy Carson had been working with Sally on a photo documentary he’s preparing on feral cat trapping. Sally would take the cats to Austin Humane Society for spay and neuter services; her average was about 200 cats annually since 2004.*

Tributes can be made on the Blue Paws Rescue group’s Facebook page, where a fund has been established in Sally’s memory.

*An earlier version of this story contained incorrect information on the number of cats Sally rescued per year.