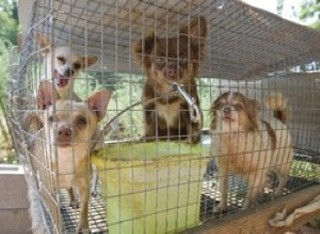 Dogs inside an all-wire cage. The Advisory Committee recommended cages include some solid flooring. (Courtesy of Texas Humane Legislation Network)

Speaking at a press conference to announce the filing of her "puppy mill" bill last winter, Houston Dem Rep. Senfronia Thompson brought with her a stuffed dog. "We're into cats and dogs," she said, holding the toy in her arm.

As such, she said, she had filed a bill aimed at putting out-of-business "puppy mill" operations – large-scale breeding operations where animals are subjected to non-stop breeding cycles while being subjected to unsanitary and otherwise inhumane living conditions. The point was not to outlaw animal breeding, she made clear, but instead to ensure that large-scale cat and dog breeders conduct their business in a legit and humane way – in turn, ensuring the sale of healthy and happy animals.

Now that the bill has passed and a set of regulations have been adopted, it remains unclear whether cats and dogs bred in the state will actually be living in more humane conditions.

While Thompson's proposition might have sounded modest, it was met with much consternation in Capitol hallways, primarily from breeders who warned that the sky would likely fall – or that they would be forced out of business – if they were subjected to strict regulation and inspection. The sky has not fallen (at least not yet); Thompson's bill passed; a Licensed Breeder Advisory Committee was formed – a nine-member group that included animal welfare experts, veterinarians, one animal control expert, and a total of four breeders (two of whom were chosen as non-voting members representing the "public" at large); that Committee promulgated a lengthy list of proposed regulations; and, finally, after a marathon meeting March 27, the Texas Department of Licensing and Regulation Commissioners voted to approve a set of regulations – many of which rejected key compromises worked out by the Committee.

As it happens, Commission Chair Frank Denton, a Conroe businessman, led the Commission to reject key provisions related to animal welfare that had been hashed out by the Committee, including a regulation related to the size of cages; a requirement that flooring in those cages be, in part, made of solid materials; and a regulation that would require a licensed vet to perform certain "surgical procedures." Exactly why the Commission – save for one member, LuAnn Roberts Morgan, a former member of the Midland City Council – chose to reject the recommended regulations is unclear. "I know what happened, I don't know why," says Skip Trimble, a veteran attorney from Dallas who serves as the legislative chair of the Texas Humane Legislation Network. "For whatever reason the animals have lost some quality of life for some time to come."

Indeed, instead of going with the Committee recommendations, the Commission voted to approve standard-of-care measures that were either specifically included in the adopted legislation – for example, a requirement that animal cages be stacked no more than three high – or defaulted to "minimum" standards adopted by the U.S. Department of Agriculture. In other words, argues Trimble, the Commission undercut months of work put in by the Committee when, if they intended to go no further than minimum standards, they could have cut to the chase months ago.

The Commission rejected Committee recommendations that animals be provided enough space, based on size and breed, to offer an animal resting room away from feces or food; that cage flooring include at least 50% solid surface – so that animals can rest their feet; and that only a licensed veterinarian be allowed not only to euthanize an animal, but also that only a licensed vet be allowed to deliver a Caesarian birth, dock and animal's ears or tail, declaw a cat, or "debark" a dog – the process of slicing the animal's vocal chords to prohibit vocalization. Instead of adopting those Committee recommendations, the Commission approved regulations that provide animals with just enough cage space so that they're not pressed against one side of a four-sided cage; allow 100% of the cage floor to be wire mesh; and require that a vet be required only to deliver and to euthanize.

In other words, advocates argue, the regulations keep in place the very status quo that the law was intended to change. "Instead of establishing true humane standards for commercial breeders, the Commission chose to essentially rubber stamp existing practices," Nicole Paquette, senior state director for the Humane Society of the United States, said in a press release. "Those practices are responsible for tremendous animal suffering and should be a relic of the past."

A request for comment from TDLR was not immediately answered, nor was an email to the Sportsmen's & Animal Owners' Voting Alliance, which opposed Thompson's bill.

Exactly why the Commission chose to reject the more stringent compromise regulations is unclear, though Denton said at the close of yesterday's hearing that he thought the details of the recommendations needed more consideration during future meetings. He is "not afraid or concerned" that the basic regulations as they stand are problematic. Moreover, he said that while some may not be satisfied – including, apparently, his colleague Roberts Morgan – he noted that at least these regulations are better than nothing. "Where we are today is with no standard[s]," he said before the Commission vote. "At least [we'll] have a standard now. ...If you look where we came from...we're light years ahead of where we were before."

That, it seems, is a matter of opinion.

You can watch the Commission's March 27 hearing here. 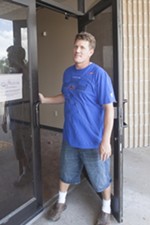