News From Around the World and Down the Street

The Daily Texan makes us all proud.

Daily Texan cartoonist Stephanie Eisner's racist take on the Trayvon Martin case set the Twitterverse, the blogosphere, and all other parts of the InterWebs ablaze today.

The cartoon – which, as Chronicle News Editor Michael King points out, doesn't even have Martin's first name spelled correctly – appeared on the University of Texas student paper's website earlier today. It has now been removed, but not before it was picked up by pretty much every news outlet everywhere – and won Gawker's coveted "'Most Racist Trayvon Martin Cartoon' Contest."

King will appear on the local FOX news station tonight to comment on the story. In the meantime, thanks for making us proud, Steph. 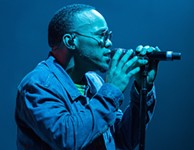