Board to push back union representation deal another two months

There's a certain irony about the Austin ISD board of trustees worrying about whether Education Austin is fulfilling its job as the exclusive consultation representative. After all, it's selected for the job in the same way they're elected to office.

Tonight, the board is expected to vote on yet another extension on their deal with the union. They already punted the decision once, at the prompting of Superintendent Meria Carstarphen. She said she wanted to increase the number of employee organizations at the table, but there's a common suspicion that this is just union busting.

During a discussion about the deal last week, Carstarphen displayed an unexpected naivety, saying that "we have a very split personality on our labor issue." The confusion came from nomenclature, she continued: "I know that Ed Austin refers to itself as a union. I know that (the Association of Texas Professional Educators) refers to itself as an association." The idea that a superintendent does not seem to know the difference between a union and a professional association (especially since, in Texas, that's often shorthand for "union busting front operation") oddly went without comment.

In fact, contrary to her comments that she's used to dealing with "real unions," Carstarphen seem to have forgotten a lot about worker relations. For example, her seeming bafflement about exclusive agreements – especially since that's how her old employers, the St. Paul Public Schools, deals with unions. For all her claims that she dealt with 25 unions there, she glossed over how they are rarely at the table at the same time. In fact, as At-Large Trustee Tamala Barksdale kept pointing out, each union is engaged to deal with the issues that pertain directly to its members. For example, earlier this month St. Paul Superintendent Valeria Silva negotiated a new teacher contract with the St. Paul Federation of Teachers.

The big argument is whether Education Austin represents all workers or just its members under the consultation deal, and the district consistently points to these numbers:
– AISD currently has roughly 11,000 employees (6,500 professional, 4,500 classified)
– At last week's meeting, Chief Human Capitol Officer Michael Houser gave the board numbers for each of the four biggest workers' groups:

But that's arguably a separate issue to what's being talked about here: The job of representing all staff under the consultation agreement. For the last 12 years, Education Austin has repeatedly been selected, by popular vote, as the exclusive consultation representative for all staff. That includes members, non-members, members of other organizations, everyone.

The administration says it fears that not everyone represented by Education Austin backs Education Austin. Well, guess what? When the board is elected, they're not going to get 100% of all votes cast. That's how representative democracy works, and the board has yet to explain fully why it's suddenly skittish about a keystone of democracy – especially since the administration keeps saying that the system has worked fine to date.

That's a point that Trustee Robert Schneider hammered home, asking whether there was ever a close election. The response from Houser was there there was "not much of a contest." Schneider went further down that path, asking why the district seemed to want to increase the outreach burden on Education Austin, rather than doing the legwork itself. He mused, "I'm trying to figure out why we place the burden of surveying other organizations, other individuals, on how they feel about a particular issue on that organization rather than the district trying to do it in some way itself."

One final coda: Board vice-president Vince Torres said he was concerned that some staff saw Education Austin's consultation meetings as a recruitment tool, and at the same time they didn't want to end-run the established process. "Certain employees," he said, "respect that they should not take issues related to the administration through anything but the administrative channels, and they shouldn't come to the board directly."

Considering how the board turned a deaf ear to the anti-IDEA families last year, maybe they should be looking at their own rules of engagement first before throwing stones at Education Austin. 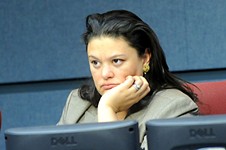