War on Women Heats Up in Washington, on Campaign Trail 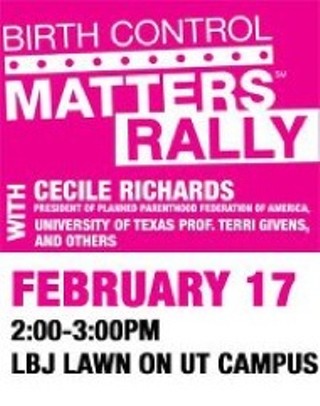 Rally today on UT campus as War on Women, and contraception, heats up

Just when you thought lawmakers in Washington, D.C., couldn't possibly be any more arrogant, Republicans in the House on Thursday held a meeting on birth control – but wouldn't let any women speak.

That's right, California GOP Rep. Darrell Issa, chair of the House Oversight and Government Reform Committee, convened the hearing to discuss the Obama Administration's directive that health insurers must provide access to birth control. That modest requirement – considering the vast majority of women in America, regardless of religious affiliation, have used birth control at one point during their lives – has become quite controversial, at least among some, and in particular among Catholic bishops. As such, Issa set up the hearing, with Republican colleagues inviting to testify a panel of Jewish rabbis, Catholic bishops and Baptist ministers – as we know, all of them men – to share their thoughts on the matter.

The move angered many of Issa's female colleagues (as well as some of his male colleagues, it should be noted – on Morning Joe, Rep. Elijah Cummings, D-Md., said the panel was just as ridiculous as if the hearing had been on the topic of prostate cancer and the panel made up entirely of women). Not only were no women allowed to testify, but no so-called "minority witnesses," those invited by Democrats (who are a minority party in the House), were allowed to testify. "It's a total rump, one-sided hearing," Washington, D.C. Delegate Eleanor Holmes Norton told reporters after leaving the hearing.

Adding insult to injury, Foster Freiss, a major contributor to a PAC that supports former Senator Rick Santorum's bid to be the GOP presidential nominee said last night on MSNBC during a discussion of Santorum's position on social issues – including contraception – that in his day, women "used Bayer Aspirin for contraception. The gals put it between their knees and it wasn't that costly."

This morning, via Twitter, Freiss apologized for the comment. Though I'm not convinced he knows why he needed to apologize.

With the assault on women and contraception heating up, several UT student advocacy groups, joining with Planned Parenthood, will hold a "Birth Control Matters" rally today at UT. In attendance, we're told, will be Planned Parenthood Federation of America President Cecile Richards.

The rally happens today, Friday, Feb. 17, from 2-3pm on the LBJ Lawn on the UT campus. Find details on the event here.