Shockingly, nobody wants to pay more for electricity 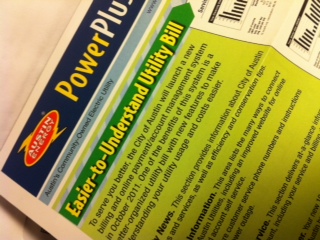 It wasn't all that long ago when Austin Energy was the city's shining star, a national leader in producing clean, efficient energy with cutting-edge technology. Just an all-around good-guy city utility that zipped along for 17 years without a rate increase. What went wrong?

That's a tough one to answer. No one at Thursday night's hearing on a proposed new rate structure explicitly berated the utility for not seeking an increase when the city was swimming in money; when the utility could pay millions in cash for a power plant (was cash really a wise decision?) while fast-tracking its green-energy agenda.

From a bottom-line perspective, it's likely the City Council wouldn't be faced with such a near-insurmountable dilemma today had the utility taken its "efficiency" mantra to heart within its own organization. Damn you, Monday-morning quarterback.

Of the approximately 130 people who signed up to speak at the City Council's first public hearing on the proposal, only six people registered in favor of the increase. Thirty six people signed in as neutral. The anti-increase crowd was an odd mix of environmentalists, advocates for the poor, church pastors, solar salesmen and supporters, and Republicans, such as Austin Rep. Paul Workman, who was the first to speak and the first to make a bee line for the exit after his testimony. Workman called the proposal "nothing less than taxation without representation," which is nothing less than what you'd expect to hear from someone who's trying to fend off a viable GOP primary rival.

Former Council Member Brigid Shea, who is considering running for mayor, also spoke, with Mayor Lee Leffingwell off the dais. Shea recalled being on the council in 1994, when the last rate increase was considered. What's different about then and now, she said, was that residents had a city-paid consumer advocate actively working on their behalf. It's true that Austin residents got a better deal in that case (the less you use, the less you pay), but in fairness to Workman and everybody, that's also nothing less than what you'd expect to hear from a potential mayoral candidate.

One of the "people's moment" highlights of the evening, believe it or not, was when a cluster of Occupy Austin folks suddenly bolted out of the overflow room across the hall and rushed into the Council chamber as Ruby Roa, a community volunteer for people living deep in the throes of poverty, approached the podium with a young woman with two young children in tow. Finally, one of the Occupiers said, explaining the flurry of excitement, people of color are getting a chance to speak after waiting more than three hours.

Roa wasn't one of the more fortunate ones who had additional time donated to her by others; she had three minutes to say this: "Try, just imagine for one minute, to walk in the shoes of a person that's on a fixed income of $680 Social Security per month, or every household making only $8 an hour, which is $320 a week. That situation is for hundreds of families we serve who do not earn the living wage. These are our neighbors that cannot afford to pay the proposed rate increase in electric rates, plus the current increase in water and wastewater." She continued listing all the fees and charges on customers' monthly utility bills. The buzzer went off as she was wrapping up, so she didn't get a chance to finish her final thoughts on how difficult it is to live in Austin when you only make eight bucks an hour. Her next shot is Jan. 26, with another public hearing Feb. 2.