The Storify of AISD and IDEA

How the East Austin community fired back against the charter plan 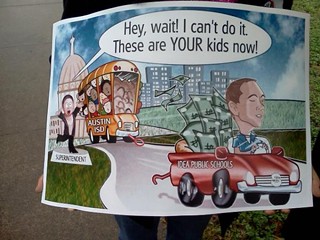 At Monday night's AISD Board Meeting, trustee Annette LoVoi said she wanted the entire record of their controversial decision to hand the Eastside Memorial Vertical Team over to IDEA Public Schools put on-line. We can't quite manage that, but we can do the next best thing: Put all our Tweets from throughout the night together.

Yup, you can read the full sordid story in tomorrow's issue, but to tide you over we've Storifyied all the citizens' communication from the night, plus the anti-IDEA press conference earlier in the day. Why? Because, frankly, it looks like the community has done more due diligence than the board did. There were details – about IDEA's track record, their approach, about the history of Eastside and the district's lack of commitment to really turning it around – that had never been raised in the boardroom before.

Twitter Has a Heyday With Shia LeBeouf
Some highlights from the dissection of 'HowardCantour.com'