Meeting in the Rain

Eastside supporters gather outside Allan as board dithers 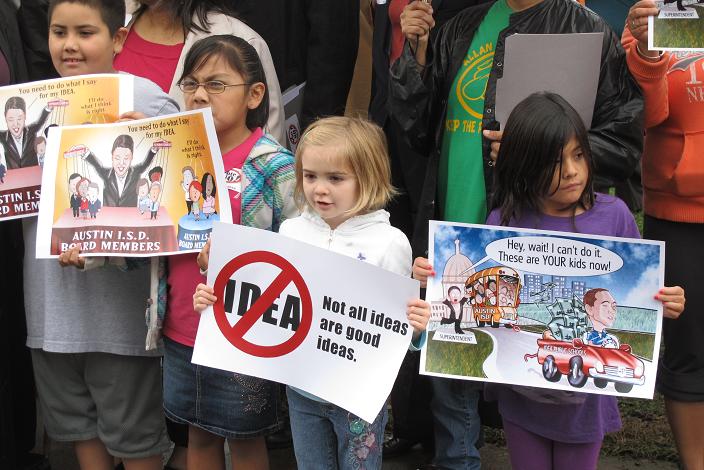 The AISD Board of Trustees may be gathering in a nice warm meeting room tonight to discuss the IDEA Public Schools proposal, but supporters of keeping Eastside Memorial a true part of AISD gathered in the rain at Allan Elementary, savaging the lack of transparency. Funny, considering even some IDEA supporters on the board say the same thing.

If rain drops were board votes, then what parents and teachers have endure to oppose the IDEA plan would wash the board away. Last night community members camped out all night to claim one of the 30 slots reserved for citizen's communication tonight. This morning two former board presidents and former Austin mayors – Carole Keeton Strayhorn and Gus Garcia – joined former District Two trustee Diana Casteñeda and dozens of angry supporters outside of Allan in the pouring rain with a clear message: No to IDEA in AISD. With that came a second message, a clear feeling of no confidence in Superintendent Meria Carstarphen and the board of trustees.

Garcia and Strayhorn both publicly chastised the current board for bulldozing through public opposition. Proclaiming herself to be a proud Allan Bulldog (back when it was a junior high), Strayhorn said she was prepared to watch the process from the sidelines because "I thought the proper action was going to be taken. It hasn't." She said the district should have provided "adequate, accurate and timely information for all our parents and families impacted before the decisions are made" – something the district had clearly not done. "A vote tonight for the IDEA charter decision, which was made de facto months ago behind close doors, would be a vote for Austin in Wonderland." What really makes this all more bizarre is that the board has obviously got very twitchy about the whole affair. The three 'no' votes from last week's meeting – Robert Schneider, Tamala Barksdale and Annette LoVoi – have always been the the ones most likely to remember that the board is more than a rubber stamp for the administration. Before last week's board meeting, board president Mark Williams seemed very disturbed by where he and his fellow trustees find themselves: He told the press corps that the process had undoubtedly fallen down and "we've rushed it." Similarly, even though board vice-chair Vince Torres voted last week to move ahead with contract negotiations, he just told the Chronicle, "If I was IDEA I would have withdrawn a month ago."

Both Strayhorn and Garcia unfavorably compared the process here to how they handled both the district's racial integration and the development of Austin Community College: With a huge number of on-campus meetings, and real public input. So far, as they noted, neither Carstarphen nor the unified board has visited Allan to discuss this issue with staff or parents. Carstarphen also blew off a staff meeting at Eastside Memorial on Dec. 8 (she did, however, manage to find time in her busy schedule on Dec.9 for a 90 minute meeting, at her request, with the Chronicle, as she made her case for 'more positive' coverage.)

For Garcia, the parents' press conference was more like how the board should and used to operate. When he was a trustee, he said, "That board believed in bringing the decisions that were going to be made to the place where people were going to be affected." Whereas his board held meetings at many campuses, he added, "This board refuses to come here, and I don't understand why."

Instead, they are keeping to their super-limited, baroque and strict citizens' communication rules. As Strayhorn noted, "These parents are offering up positive solutions, and they can't even be heard for two minutes." 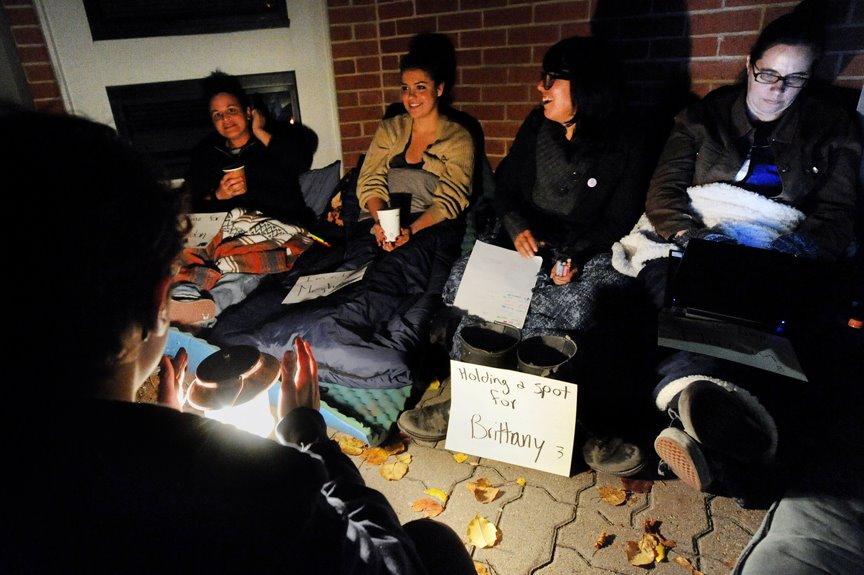 Volunteers from Occupy Austin sit up all night to hold places in the sign-up line for AISD's citizen's communications session before tonight's meeting. Only 30 people will get a chance to weigh in before the IDEA vote. (Photo by John Anderson)

Casteñeda, the first female native Austinite to represent district two under the minority-majority single member district plan, said the district's proposal was simply "passing the buck" when it comes to providing a quality education in East Austin. As the former trustee for both Allan and Eastside (then Johnston) she accused the board of being accountable only to the corporate community. "Dr. Carstarphen has proven what I predicted three years ago, to be a failure, and it's time to remove every school board trustee that supports her and this futile plan." All AISD has to do to fix the East Austin schools, she argued, is to create a student evaluation tool, similar to special education's individualizing educational plans. Instead, she said the administration is planning to hand schools over to "an unproven, unaccountable second-rate charter that does not have roots in East Austin."

Of course, the new talking point about the No IDEA movement is that it is really a front operation for Southwest Key. That question was posed this morning, and it's undeniable that some prominent Southwest Key supporters, including Del Valle trustee Richard Franklin, were present. Garcia used to be a Southwest Key board member but noted he left that position earlier this year: He also argued that the impetus for Southwest Key in this neighborhood was that AISD has shut down the area's only middle school when they turned Allan into an elementary. Strayhorn laughed at any suggestion of a connection to the East Austin private charter, while the idea that Education Austin co-president Ken Zarifis (also present) is a fan of the group is pretty much laughable. Garcia said, "These people are here only because they don't like the way this IDEA presentation has been made and they don't know why should accept it."

Zarifis' co-president Rae Nwosu said it was "unbelievable" that the board could continue with the plan after all these comments, three staunch no votes (including both at-large trustees) and such a broad coalition of opposition. As Strayhorn put it, "I believe that our sometimes imperfect system of government, to work well, requires one key element: Elected officials trust in all the people they represent. Those that voted for them, those that voted against them, and those who could not vote or did not vote at all."