Our council preview, Pt. Two, cranks it up to 11 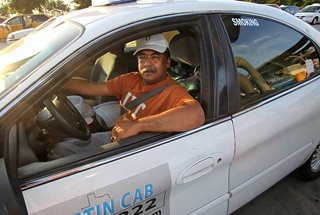 Yesterday's first-half of our Thursday agenda preview was just an appetizer: in our second-half roundup, we note several intriguing items before to City Council this week, including potentially big changes on taxis, temporary live music permits, and more. Read on, friends.

Item 51: This item from Laura Morrison and Bill Spelman would create “interim council meeting procedures” largely relating to citizen input on agenda items. Among other stipulations, it states “A person, other than a council member, may not participate in removing more than three items from the consent agenda for a single-council meeting;” however, citizens may speak on other items removed by other citizens. The changes are borne by council gadfly (and stated council candidate) Clay Dafoe's habit of pulling several undistinguished council items each meeting to loudly oppose. The interim changes stand into the spring.

Item 53: And another resolution to a quandary posed by one individual: Item 53, from Spelman and Kathie Tovo wades into the status of “ex officio” members of city boards. As we wrote last week, The City Charter allows the chair of the Board of Adjustment to serve on the Planning Commission, but no one deigned to do so until current board chair and neighborhood activist Jeff Jack recently started sitting on Planning Commission meetings. Item 53 states

An ex officio member of a board that is subject to the requirements of this chapter may participate at board meetings, but may not vote or bring a motion and does not count towards calculation of a quorum or any other minimum vote count required by city code or state law …

(A) The Planning Commission is composed of nine members appointed to the commission by council.

(B) The city manager, the chairperson of the zoning board of adjustment, the director of public works, and the president of the board of trustees of the Austin Independent School District shall serve as ex officio members.

(C) The commission is established and governed by City Charter Article X (Planning). The Charter provisions supersede this chapter to the extent of conflict.

Item 55: From Mike Martinez and Laura Morrison, tweaks yet again the requirements for Live Music Permits. It scrubs language prohibiting amplified sound after 10:30am, but changes temporary sound permit applications to include info on venue size and whether alcohol consumption is allowed. It also notes that for those temporary permits “The use of sound equipment at the same site or property may not be authorized under this section for more than 16 days per calendar year. No more than four days may be consecutive for each permit. [No more than four permits per year may be issued under this section for the same site or property.]”

Item 57: Here's a goofy one - 57, from Spelman, Lee Leffingwell, and Martinez would “Approve a resolution directing the City Manager to implement an additional pilot program to assess the efficiency of food waste disposers in diverting the organics from landfills, and to fully explore additional options for residentially-generated food scraps.” Essentially, disposal maker InSinkErator has pitched the efficacy of their products in attaining the city's zero waste goals, but Austin Resource Recovery is doubtful. Still, this item attests to council interest in what they have to say.

Item 58: From Morrison, Cole and Tovo,, 58 calls for “the City Manager to work with the Community Development Commission and other stakeholders to develop recommendations for additional strategies of achieving geographic dispersion of affordable housing,” with recommendations due March 27, 2012.

Item 62: Citing poor oversight of the city's cemetery management and at the Austin Convention Center, this item from Spelman, Cole and Morrison directs City Manager Marc Ott “to prepare a comprehensive, city-wide contract management plan that ensures the City of Austin meets and adheres to best practice contracting standards. The plan should address design, development, implementation, and monitoring of and accountability to an effective contract management system.” The plan should

1. Develop policies and procedures necessary to manage contract development, execution, and implementation, as well as an effective monitoring system, including performance measures;

3. Ensure that staff involved in the process has necessary competencies to ensure policy adherence and goal achievement;

4. Ensure staff compliance with and accountability to the contract management plan.

with a due date at the end of April.

Item 65: An unexpected addition to the always contentious realm of taxicab policy, courtesy of Martinez, Morrison and Tovo. Citing the peak demand strains plaguing Austin's cabs (which only number 675), the item calls to issue 50 new permits to Lone Star Cab and 25 to Austin Cab. More intriguing, it asks the city manager and stakeholders “to develop a feasible proposal for implementing legacy permits to be presented to City Council by February 9” – a system akin to the “medallion” system in cities like New York, where individual drivers retain a portable permit they hold themselves – instead of our current system where drivers are in thrall to companies that retain the permits. “The proposal should include provisions for up to 25 permits being designated for drivers and should suggest options that incentivize sustainable fleets,” the back-up continues.