AISD and IDEA in Tweets 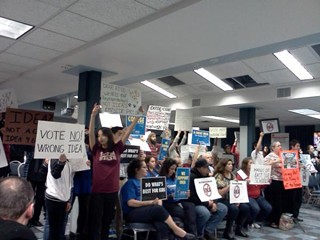 Battle of the banners: AISD's board room splits over the IDEA Public School in-district charter plan for Eastside Memorial (Photo by Richard Whittaker)

Like everyone else, we're still reeling from the carnage at last night's Austin Independent School District trustee meeting, where community advocates and the board split badly over the IDEA Public Schools plans for Eastside Memorial. Fortunately, our Twitter feed can fill in the blanks.

The quick boil-down is that the board gave Superintendent Meria Carstarphen everything she asked for in her first annual facilities recommendation except for one thing, and that was the big one. The board failed to come close to a consensus decision on the IDEA proposal, instead choosing to punt until next week. No-one looked truly happy with this decision, and the truth is that the district's credibility seems to be running on fumes with many of its most committed critics and advocates. Local opposition to IDEA was high, and is unlikely to have faded by next Monday.

We'll be covering this week's meeting and previewing the next in full in this week's paper. However, in the mean time here are our collected Tweets (gathered courtesy of Storify) from the board room.