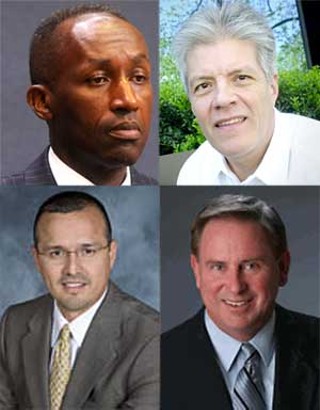 An ill-wind blew into City Council chambers yesterday, during a post-mortem on what caused the city to lose $400,000 in stimulus bucks to weatherize 54 low-income Austinites' homes this winter. And looking back a day later, there was more than enough blame to go around.

Before council discussion began on Item 5, speakers from Austin’s minority contracting community lambasted the city for losing the money, leading Bill Spelman to ask the $400,000 question: “What actually happened” to lead to the city’s receipt of only $200,000 in funding instead of an initial $600,000?

After a brief discussion with Austin Energy general manager Larry Weis – who noted City Manager Marc Ott was the party that pulled the funds application from the council agenda last month, creating a postponement that meant the city had to forego the stimulative, “shovel-ready” funds – Spelman turned his increasingly pointed questions to Ott. “"I asked it be held to get the answers,” said Ott, referring to minority contracting opportunities that had previously emerged over the course of the two-year spending project, concerns aggravated by the tight timeline the city faced to spend the money. “But at that time, it really wasnt too late."

But it soon would be, as the item was pulled from council’s Nov. 10 meeting – heading into the holiday break, council’s next meeting wasn’t scheduled until Dec. 8. “Neither of you were aware,” Spelman asked of Ott and Weis, “that … holding it off for [four] weeks would make it impossible to get the bulk of this money?” He continued grilling Ott, asking if her ever considered calling a special council meeting in the interim to deal with the issue. Buck passing continued, with Ott referring specific questions to assistant city manager Rudy Garza (there to assuage minority contracting concerns) and Garza referring questions back to Austin Energy and Karl Rábago, who ultimately made the call to the state soon after the item’s postponement, stating, in his own words, “I'm not confident we’ll be able to commit these funds adequately.”

Ott ultimately stated “I'm the city manager, and the buck stops at my desk, so I take responsibility,” but miscommunication – or non-communication regarding the time sensitive nature of the spending – clearly started at the top down and continued from there. For example, Austin Energy officials repeatedly referred to their actions initiating as a “purple slip” item – an expediting item meant to circumvent the usual bureaucracy – but neither Ott, nor Garza, nor Weis, nor Rábago (who, as the one who formally rejected the funds, was arguably the only one who definitively knew of a drop-dead date) further imparted the time-sensitive nature of the request. Amazingly, even the backup before council that day didn’t mention a time-crunch: instead, it states “The grant period now extends … through February 28, 2012.”

Spelman closed with stern words for the city manager, saying “We need to make sure that you know the consequences of withdrawing an item on a very short time frame. … 54 families are not going to get weatherization services because of that failure to communicate.” Leffingwell tried to step in at this point, calling for a “war room” mentality at AE to address similar accelerated timelines in the future, instead of “assigning blame.” But then Mike Martinez joined in, dressing down Rábago for quotes he recently gave the Chronicle brushing aside criticism from the minority contracting community: “If that means that I was obnoxious or whatever adjectives they want to use, that's the price to pay for leadership – that's the price we pay for trying to get a million dollars of federal money working in our community. If the price is that a few people got their noses out of joint or thought they had a better way of doing it, so be it." Martinez collectively surmised the entire folly was a losing one for Austin in that it pitted minority contractors against low-income and minority residents benefiting from weatherization services. When we start doing that, he said “We start losing sight of everthing we are."

Spelman suggested the utility “make whole” the 54 homeowners left out in the cold, an idea we’ll certainly be hearing more about soon. Judging by the anger on display yesterday, we decidedly haven’t shut the door – weather-stripped or not – on this story.