Pop Up Shop Coming to Congress 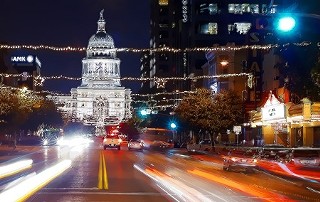 For you consumers who weren’t occupying Best Buy on Black Friday, bad news: There’s only 24 days left until Christmas! Luckily, there's plenty non-big box shopping options out there for you, including pop up retail. And believe it or not, their existence actually traces back to City Council.

The Congress Collective Pop Up Shop will be opening Dec. 1, at 910 Congress. Similar to our recent, recessionary obsessions with food trailers, pedi-cabs and other relatively low cost, low barrier-to-entry start-ups, pop up stores are temporary establishments that exist for only a few weeks – or in the Congress Collective’s case, only days. (Their entire run is Dec. 1-3.) It’s kinda a win-win, in that dormant properties wanting long-term tenants give a quick cash infusion, and retailers get physical space without a long-term lease (plus the manufactured demand and mystique inherit in such a short term proposition.)

Apparently, this wasn’t the Congress Collective’s first outing – although it sounds like a much happier one. As they note in a press release, last year the pop up “was met with city restrictions.” Enter the City Council, who in early November approved a resolution authorizing “temporary pop-up retail” Downtown.

“Especially during the holiday season, we have vacant tenant spaces that could possibly be rented for different uses,” explained zoning czar Greg Guernsey at council’s Nov. 3 meeting.  “For whatever reason the property owner has executed a release to have a tenant for several months but there may be someone that might be willing to go in during the holiday season or for short periods of time when we might have events that might occur Downtown, to lease a space that is suitable for retail. It might be for one month, two months, it might be for three months. This ordinance would allow that in our central business district and our Downtown mixed use district.”

Council unanimously passed the measure, with pop ups able to apply for a total of a two 45-day periods – which means the Collective could stick around a little longer if they’d like to.