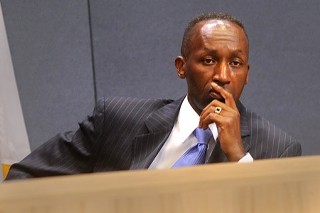 Heading into the holidays, Marc Ott shook things up with city management (Photo by John Anderson)

What’s up guys? The Hustle’s back, tanned, rested and ready after a wedding, a honeymoon and holiday gorging. But while I’ve arguably occupied an altered reality for the past few weeks, how does that compare to the rabbit hole that is city politics? After the jump, news on some major staff shake-ups in City Hall.

Last week, City Manager Marc Ott announced a major reorganization of the city’s executive team. In a Nov. 22 memo, he says he did so “with three goals in mind. First, it’s important to give Executives new and different responsibilities to help the team gain broader knowledge…  Secondly, I’m putting departments with similar functions in the same service group to continue to encourage coordination and the efficient and effective delivery of all city services. Finally, I have tried to balance the work load as much as possible (keeping in mind the first two goals) across my Executive Team.”

Assistant City Manager Mike McDonald continues his role overseeing public safety, which now includes Code Compliance. Noting Compliance “works very closely with our public safety departments in our PACE (Public Assembly Code Enforcement) team,” Ott notes he “placed Code Compliance in the Public Safety Service group to build on that collaboration.” Additionally, Ott has created the position of deputy city manager for McDonald, noting the position includes “taking on my duties when I’m absent, attending some functions in my stead, and generally serving in a direct support role to me as he has in the past.”

ACM Robert Goode received Austin Water, as part of the Infrastructure Services he now oversees: Public Works, Transportation, Austin Resource Recovery, the Capital Planning Office, and the waterworks. “With Capital Planning within this group, a ‘cradle to grave’ outlook should enhance all these department’s capital delivery programs,” Ott writes.

Ott also announced additional changes to his Chief of Staff Anthony Snipes' duties, the City Attorney’s office, communications with the Police Monitor, and more. You can read the entire memo here. And compare and contrast all the ACM's new positions with their past ones by looking at an older organizational chart here.

… Would be it that was it for staff shake-ups. Big news from the mayor’s office, with unsung behind-the-scenester, fashion plate, and Communications Director for Lee Leffingwell, Matt Curtis, leaving the mayor’s office. Curtis, who previously worked for council member Brewster McCracken, then mayor Will Wynn, has left the city. His replacement in the mayor’s office comes in the form of Andy Mormon, who previously worked with Leffingwell before leaving, going down to Ghana, then returning as the the city’s Chief Service Officer. With Mormon vacating the service position, it will now be filled by Sly Majid, Executive Director of the Eastside Community Connection.

“It’s tough to see a longtime friend move on to new opportunities, but we know Matt Curtis will always be a community servant,” says Leffingwell in a press release. “I’m excited to have Andy Mormon to our office, and Sly Majid on board as Chief Service Officer. We continue to have a great staff that is dedicated to the City of Austin.”

The Hustle wishes the best of luck to everyone in their new positions. 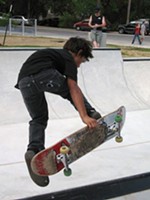 Skate and BMX Park Finally Here
After a decade of waiting, there's somewhere to skate Downtown