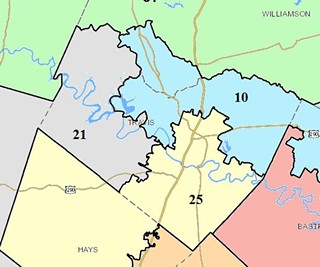 The new interim Congressional maps, issued this morning, simplify the lines that split Travis County and return it to a three-district county

UPDATED: With only two working days before filing for the 2012 primaries opens, the three-judge panel in San Antonio has issued interim Congressional redistricting maps that go some of the way to making Travis County whole.

The judges' plan throws out the insane plan to split Travis County five ways, instead returning Travis to something more like the old three-way split. In fact, it arguably neatens up the lines between Congressional Districts 10, 21 and 25. However, Austin remains the biggest city in America without a single, unified congressional district.

However, the court's proposal wipes away the legislative plan for CD 35 (seemingly so named because it followed I-35 and looked to have been designed just to create a Democratic primary fight between veteran Travis County Congressman Lloyd Doggett and San Antonio state Rep. Joaquin Castro.)

So what is on the table?

CD 10: All hail the new dragon! The district, held by Republican Michael McCaul, stretches further west into Northern Travis than before, and gains Milam. It retains northern Bastrop, Lee, Burleson and Washington. However, it sheds Austin County, half of Waller and much of its old holdings in Northern Harris into the new CD34.

CD 21: GOPer Lamar Smith's seat retains Western and South-West Travis, plus Real, Kerr, Bandera, Kendall, Comal and Blanco. However, it picks up three whole counties – Gillespie, Llano and Mason – from CD 11 and in exchange its footprint in Northern Bexar changes dramatically to allow for a heavily redrawn CD20.

CD 25: In a sign of Travis' increasing population, Doggett's district shrinks dramatically in acreage. Aside from keeping South-East Travis, he sheds a sliver of Hays county that goes into the new look CD35. He also loses Caldwell, Gonzales, Bastrop, Fayette, Lavaca and Colorado counties, which all go over to the new CD34.

Basically the Republican legislature’s extreme slicing and dicing of Travis County has been rejected. Travis County is now divided into three, not five, districts, and Congressman Lloyd Doggett’s CD 25, which was targeted by Governor Perry, has been mostly reinstated.

This means that Doggett will run for reelection in CD 25. Representative Joaquin Castro will run in the re-drawn CD 35.

As for Doggett himself, he said:

My deepest thanks to the many people throughout the region, who have stood with me during these tough recent months. Together we have overcome, and together we will continue the fight for an even better country. While disappointed to lose communities in Lockhart, Bastrop, San Marcos, and Kyle, I am greatly encouraged that so much of Austin is united. Now I seek reelection by my neighbors.

Since the Court defines this as an "interim" plan, I know that in another 18 months, after this election, Governor Perry and the GOP-controlled Texas Legislature may yet again scheme to oust me through redistricting. Republicans have given me the opportunity to represent much of Texas, just not all at the same time.

The Lone Star Project has also issues a statement and an early analysis of the statewide picture.

The Federal Court map helps restore fairness to the Texas Congressional Map by creating opportunities for minority candidates throughout the state. While many Texans justifiably hoped for an additional Hispanic District in North Texas, the map is a great improvement over the State's partisan, racially discriminatory plan.

Many commentators will focus in the coming days about the impact this map will have on Texas and national politics. However, what is most important today is that the minority voters in Tarrant County, Bexar County, Hays County and all along the Texas Mexico-Border will once again have a voice in who represents them in Congress.