Federal panel split on how to cut Travis House seats 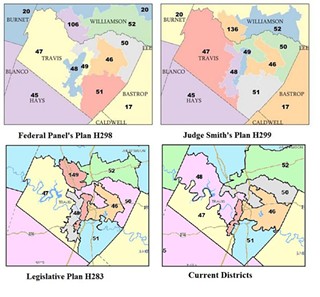 The past, present and potential futures of the Travis County House delegations (click to enlarge)

Texas voters may not know what their Congressional districts look like, but yesterday a three-judge panel in San Antonio issued interim House and Senate maps. Statewide, there were major changes, but what does it mean for Travis County?

While launching a severe overhaul of the Fort Worth Senate seats, the panel decided to leave the Travis County upper chamber as the legislature planned, split four ways. However, the panel split over the House proposals. two of the three US District Judges on the panel, Orlando Garcia and Xavier Rodriguez, issued an interim house map that has had Democrats statewide excited about increased opportunities for minority voters. However Judge Jerry Smith of New Orleans presented his own minority proposal. The two maps differ dramatically on how they split Travis County's six house seats.

– Smith's minority proposal, H299, leaves Travis exactly the same as the lines proposed under H283. However, this may be moot if the Rodriguez and Garcia map stands, and may only become relevant if there are further legal challenges.

– Under both H299 and H298, Eddie Rodriguez's House District 51 keeps to the lines proposed by the Legislature under Plan H283.

– Garcia and Rodriguez's map, Plan H298, shuffles much of the North of the county.

– Under H298, the 'Horse Shoe' created in Dawnna Dukes' HD46 back in the last redistricting gets filled back in.

– In exchange for losing those boxes, Mark Strama in HD50 takes some boxes from the proposed lines for Donna Howard in HD48.

– H299 maintains the orientation switch between HD48 and HD49: Under the last redistricting, the neighbors effectively ran East-West: Now they run North South, giving West Austin to Howard in HD48 and leaving the rest of Western Travis to Paul Workman, the county's sole Republican rep.

– That said, H299 does redraw the boundary lines between the two dramatically from H283. Having lost the North-West 'nose' of HD48, the center of Howard's district would push further out West along the Colorado.

– In the midst of all this, Elliott Naishtat's central city district sees a few minor tweaks, but nothing serious.

The initial response seems to be that these new lines may benefit all Travis County incumbents. That said, both Dukes and Strama are absorbing additional Republican-trending boxes, but when asked this morning both were still confident that these are winnable seats.

Lawyers for all parties only had until noon today to comment on the panel's proposals. After all, the clock is ticking for the court to have maps in place before filing begins on Nov. 28.