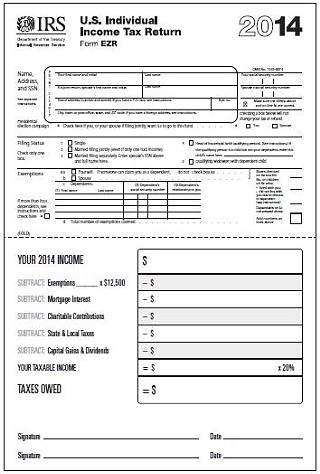 Rick Perry's fictional tax form: Seriously, do not try to submit this. It will not end well.

So finally we get to see Gov. Rick Perry's financial plan: Take bad, failed plans from previous right-wing White House incumbents and failed presidential wannabes, and bolt them together.

Monday morning in Greenville, South Carolina, Perry unveiled his plan for a tax return so simple that it can fit on a postcard. Sounds appealing. After all, isn't the US tax code an insanely complicated mess? Absolutely. But the root of its complexity remains the number of exemptions and tax breaks written into it, not the underlying graduated system. That places a higher percentage burden on the rich but, as Warren Buffett noted in the New York Times, the rich can afford it.

What Perry wants is an optional 20% income tax, with no federal sales or VAT. Which, by the way, was what Steve Forbes proposed in his supermarginal 1996 and 2000 runs for the GOP presidential nomination. In fact, it is so much like it that Forbes is endorsing the Perry proposal. That's probably quite upsetting for long-running flat earther taxer Newt Gingrich: First Perry steals his campaign staff, now he steal his platform. Gingrich's campaign website now sports a side-by-side comparison to see who's tax is flatier.

That's just the beginning of the déjà vu, as other oldies re-emerged from the GOP presidential crypt. For example, ending the estate tax (yeah, Perry even calls it the death tax) which only affects you if your estate is worth more than $5 million. Where have we heard that plan before? Oh, yeah, George W. Bush.

Then there's the traditional fist-shaking at the feds with a pledge to "fix the federal regulatory system." Translation: Cut the funding to the agencies that ensure that there is actually food in your food and your water does not catch fire. Perry went so far as to claim that the pre-Dodd-Frank act regulations for Wall Street were "adequate," leading to the inevitable conclusion that Bernie Maddoff is his chief financial adviser.

The chuckles don't stop there. Perry, whose fearless dedication to tort reform means Texas leads the nation in people without healthcare insurance, wants to "reform Medicare and Medicaid to improve health care." Yeah, because tort reform has worked so well that Texas ranks 42nd in number of doctors per capita. Oh, yeah, and he wants to raise the eligibility age.

But doesn't America's amazing health system mean that people are living longer and so do not need access to such services? Unfortunately, the opposite is true. Many Americans are dying younger than their parents. Yeah, you read that right. In a highly depressing 2011 study, researchers at the Institute for Health Metrics and Evaluation found that life expectancies in 85% of counties have lost ground against the international life expectancy frontier (that's academic-speak for the best predicted lifespan in the top ten nations for longevity.) Life expectancy in some counties have fallen back down to pre-1957 levels (read the full report here.)

And what about Social Security? In an obvious sop to aging primary voters, Perry says he will "preserve benefits for current recipients." But what about everyone else? Well, he wants to "give younger workers the option to own their contribution." Translation: Privatize it, just like Bush 43 wanted to do, before that adequate Wall Street regulation Perry lauds so much failed to prevent the current economic collapse.

Oh, and his call for a Texas-style balanced budget should make anyone that has seen what it has done to emergency services, schools, health care, and even charities balk.

As for the idea that Perry would close tax loopholes, call us when we stop laughing.