Perry gets mean as his campaign loses steam 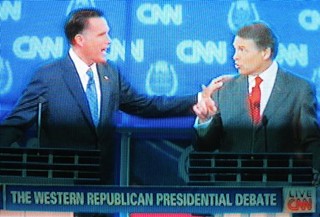 A touch too much: Rick Perry and Mitt Romney square off during the CNN Western Republican Presidential Debate

There is a certain desperation in some quarters about wanting to make Gov. Rick Perry remain a real contender in the GOP presidential race. As if sensing that urge amongst pundits, Perry's campaign adopted a new strategy for last night's CNN Western Republican Presidential Debate: If you can't win by the rules, just throw the rule book out.

Before the Las Vegas throwdown, the Washington Examiner reported that a Perry campaign insider told them, "We're going to pay a little less attention to the rules." The staffer claimed that his guy had stuck to the time restrictions at the other debates when no-one else did, so now it was his time to shine (he then stomped his feet and demanded that, if the other kids get to stay up late, why does he have to go to bed?)

Perry even quasi-conceded this during the debate, telling moderator Anderson Cooper, "You get to ask the questions, and I get to answer like I want to."

He went further than not obeying the rules: He barely kept to the topic. When Cooper asked him why Texas has the nation's highest rate of uninsured children, he blamed it on "the huge number of illegals" coming to Texas. They were attracted by what he called the "magnet" of Texas' job creation record. Because of that, he said, "Those people that hire illegals ought to be penalized."

If this caused a shudder amongst some of Perry's bigger donors, not to worry: He wasn't talking about them. Of course, it is very easy for Perry to make statements like this on the campaign trail. It would be much tougher at home, where stalwarts of the business community like Texas Association of Business' head honcho Bill Hammond have lobbied against measures like E-Verify. So why throw this stone? Because he wanted to accuse front runner Mitt Romney of hiring illegal immigrants to work on his lawn.

How did that plan of attack work out? Meh. Perry probably did better than Newt Gingrich and his zero-rate capitol gains tax, or Michele Bachmann (who resurrected the old "anchor baby" line) and her double-rainbow double-walled fence. He at least outperformed Rick Santorum, who just came across as a pissy child as he attempted to belittle Romney over health care. However, the two Ricks were calling from the same playbook: Pitch an allegation out against Romney, then talk over him.

Romney did not only counter Perry's tactic, but threw in some political jujitsu: "You have a problem with allowing someone to finish speaking," he retorted, "and I suggest that if you want to become president of the United States, you got to let both people speak." Rather than lying down, he picked up an anti-immigration hammer of his own to bash Perry, reminding the audience of another "magnet" – in-state tuition for students.

Did it work for Perry? Well, seemingly, no. The scorecards are already up, and the consensus seems to be that, even if he slowed Romney a little bit, there was nothing close to a killing blow to the front runner. Instead, there were some haymakers that whistled past his head without connecting. Romney kept his cool and (if crowd noise is anything to go by) kept the debate audience on his side, while Perry looked like he had nothing but mudslinging left in his arsenal.

The press critiques are fairly unflattering. CBS News observed that, even with the added verve, Perry still showed "a few of those brain-freeze moments that have become all too familiar to debate watchers." Meanwhile, Chris Cillizza over at The Fix tagged "Rick Perry's aggression" as one of the night's big winners, but "Rick Perry’s bullying" went straight into the loser category. Noah Rothman at The Ology.com summed the night up succinctly when he wrote, "Well, someone took their angry pills last night. Unfortunate side effects may include becoming absolutely insufferable."

As for Perry's opponents, they have picked up on the idea that this shoot-from-the-hip Perry was no more successful than Mr. Keep To the Script. This morning Romney's people were calling Perry's performance "desperate" while Herman Cain released a video suggesting that Republicans may want "a nominee who could actually win a debate with Obama."