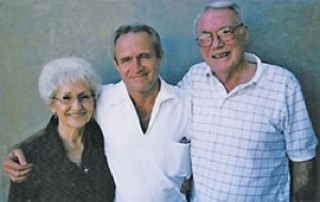 Michael Morton with his parents, Pat and Bill Morton (Courtesy of the Innocence Project)

With Michael Morton finally out of prison, is Williamson County District Attorney John Bradley trying to pull the plug on an investigation into possible misconduct by his office? That depends on who you ask.

On the same day that the Court of Criminal Appeals vacated the conviction of Michael Morton, imprisoned in 1987 for slaying his wife – a crime that newly discovered DNA proves he did not commit – Williamson County Assistant District Attorney Kristen Jernigan filed a two-page motion with the court, suggesting that the clearing of this case be expedited, mandating Morton’s final release based on innocence and clearing the way for him to access state compensation funds for the wrongfully convicted. Ordinarily, wrote Jernigan, the state would have 10 days to re-file its case against the original defendant, but in this case the state was looking to waive that period and speed things to their conclusion – there is, she wrote "good cause ... for the mandate to issue immediately," not only so that Morton can seek monetary redress from the state, but also because the writ to the CCA based on innocence was agreed to by her boss, the elected D.A. Bradley.

Shortly thereafter, following a negative response from the defense, Bradley withdrew the motion.

It would seem at first that the act was in good faith – perhaps a way for the state, and in particular Williamson County, to begin to make recompense – but that is not how Morton's attorneys reacted. They instead see the move as yet another play orchestrated by Bradley in an attempt to prevent serious inquiry into whether it was prosecutorial or police misconduct that landed Morton in prison with a life sentence. (His wife's real killer – now also implicated in at least one subsequent murder, of Debra Baker, in Austin in 1988 – remains at large, although his identity, obtained from DNA on a bandana found not far from the Morton crime scene, has not been made public.)

Indeed, Morton's attorneys have argued that both the Williamson County D.A.'s office (primarily under then-prosecutor Ken Anderson, now a district judge, but also under Bradley, who has been involved in the Morton case since mid-decade) and the county's sheriff's office (via the case investigator, retired Sgt. Don Wood) each played a specific role in suppressing evidence favorable to Morton's consistent claim of innocence. For example, Bradley blocked the defense's request to test the bandana – because it was found nearly a 100 yards from the home, Bradley claimed its connection to the case was questionable. Neither Anderson nor Wood disclosed a conversation the officer had with Christine's mother just days after the murder, saying the Mortons’ young son, Eric, had revealed that he saw the murderer – and that it was not Michael Morton. Moreover, it appears that police ignored additional leads that could have pointed the state to the real killer.

Had the CCA rejected Morton's innocence claim, the court would still have to consider the evidence related to prosecutorial misconduct; with their concurrence, there is no legal reason for the court to address those underlying claims. Morton's attorneys with the Innocence Project had crafted a compromise: Should the CCA grant relief based on innocence, the district court’s limited investigation into the remaining issues would continue for 30 days.

Thus, Jernigan's motion – filed without prior notice to Morton's attorneys – was not received as an olive branch. "After nearly [25] years of wrongful imprisonment for a crime that the State has finally conceded he did not commit, and in which the homicide victim was his own wife, Mr. Morton is entitled, at a minimum, to hold the State to its promise to let him make a limited inquiry as to how and why he was wrongfully convicted in the first place," John Raley, one of Morton's attorneys, wrote in a brief filed Oct. 13. "The State should not be permitted to ... short-circuit that process. Certainly, there is no 'good cause,' and no benefit to the party in whose interest the State claims to be acting, for it to do so."

Bradley's office subsequently pulled the motion, and Bradley told the Austin American-Statesman that Morton's lawyers were "overreacting" and that he did not intend to halt the investigation. But in the wake of his aggressive chairmanship of the state Forensic Science Commission, many defense attorneys and some lawmakers have reason to doubt Bradley’s motives. Indeed, Sen. Rodney Ellis, D-Houston, who also serves on the Innocence Project board, released a statement saying that Bradley's apparent end-run attempt on the Morton investigation was disturbing. The Morton case "may be one of the clearest incidents of prosecutorial misconduct in the last [30] years," he said. "I am very concerned by attempts to hamstring the investigation ... before it even gets underway. This raises serious questions and damages the interests of justice. It has the appearance of the search for damage control rather than the truth."