Cleanup Versus Clean Out 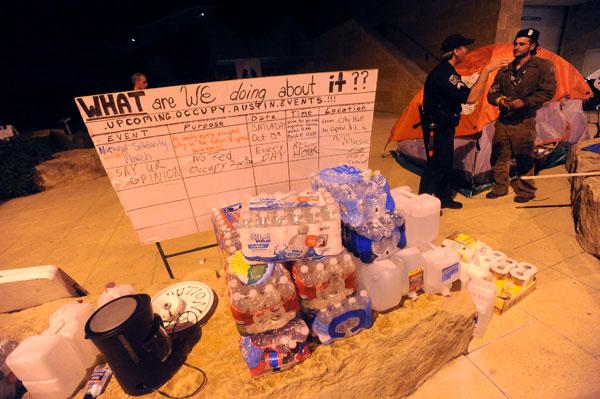 Occupy Austin at City Hall early this morning: Seriously, there are some council offices that are not this tidy (Photo by John Anderson)

No-one was arrested at the Occupy Austin protest last night. Nor was there any cleaning with power hoses. These facts are connected.

This was a little bit of a surprise, because the cleaning schedule for the plaza at City Hall has become the biggest point of friction so far between Austin Police Department and Occupy Austin.

There was a scheduled cleanup of the plaza on the books for 2am this morning: However, four people were arrested late Wednesday night came when city staff attempted another regular scrub-down. Chronicle photographer John Anderson sacrificed some sleep this morning to see whether there would be a repeat, and reported that the protesters had actually done everything they could to prepare for the cleaning staff, including moving their tents and signs to the sidewalk. However, around 2.45am the announcement was made that there would be no cleanup after all, and that was that. Anderson also noted that the plaza actually looked pretty clean and tidy (the biggest cleanup requirement may end up being the chalk drawings on the sidewalk.)

The specifics of Wednesday's arrests may come up for debate (although there are suggestions of tensions between some members of Occupy Austin who are in for the polite long haul, and others who they see as wanting to get arrested as a means of protest.) Yet that event raises a significant question about balancing the long term future of the plaza between the protest and day-to-day use – a question complicated by the actions of police far beyond Austin city limits.

Think of it this way: In 1963, Birmingham's Commissioner of Public Safety Bull Connor turned the fire hoses on Civil Rights protesters to get them to move. Now some contemporary campaigners believe that power hoses are being used in a subtler way to the same effect. 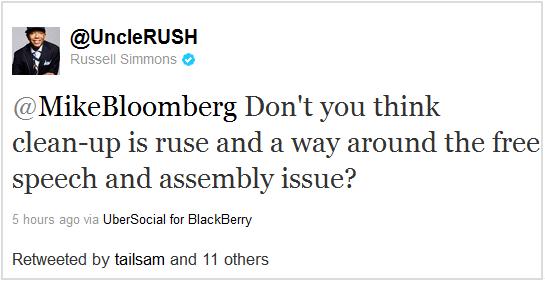 Uncle Rush to the rescue: Social activist and Def Jam co-founder Russell Simmons has offered to pay for cleanup at Occupy Wall Street

This morning, Brookfield Office Properties in Lower Manhattan called off plans to 'clean up' Zuccotti Park, the central location for Occupy Wall Street's camp. This came after a weird to-and-fro: First Mayor Michael Bloomberg said they could stay indefinitely as long as they obeyed the law. Then Brookfield wrote to NYPD Commissioner Raymond W. Kelly, asking for his assistance in clearing the park. They claimed that the camp "violates the law, violates the rules of the Park [and] creates health and public safety issues." Bloomberg pulled a volte-face, telling the occupiers to get out by Friday. However, the occupiers pulled some political jujitsu and cleaned up themselves. Now Brookfield are reported by Bloomberg News (no relation) to have backed down.

Timing in this may be as important as anything else. The Denver Post reports that Colorado State Patrol troopers in riot gear broke up the Occupy Denver protest this morning. This comes after the Boston Globe reported that members of Veterans for Peace were beaten while Boston PD swept through Greenway Park. While Occupy Austin has neither of the scale, tension or national media attention of those events, the last thing APD needs is to be seen as being part of a broader crackdown.

See more images from Occupy Austin at our gallery, updated with daily shots.