Get ready, 'cuz the fun hasn't even started 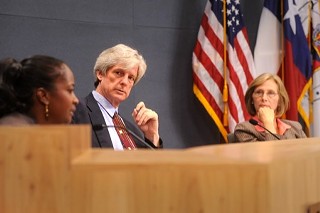 Three of the four votes for May: Cole, Spelman and Morrison (Photo by John Anderson)

In a third and final vote this afternoon, a split City Council took the final step to preserve a May mayoral election in 2012, instead of moving the contest to the higher-turnout month of November.

No speeches from the dais at this special-called meeting marked the occasion, as council had exhausted the issue once it was unexpectedly added to the council’s work session schedule last week, and then was taken up again at council’s regular meeting yesterday. And really, once you quote Barbara Jordan and Martin Luther King Jr. to support your cause (Sheryl Cole doing so yesterday in her defense of May), really, where’s left to go?

This time, the speakers did most of the talking. City Hall did the time warp with its initial speakers: Carole Keeton Strayhorn and Glen Maxey, both in support of November. Strayhorn, speaking for her newest concern, Austinites for Action, argued there were more registered voters clogging I-35 on their way to the Cotton Bowl to ensure the ‘Horns “beat the hell out of OU” than vote in May elections. Maxey, bolstered by several minutes of donated time, ran through a list of some 250 supporters of the November move (a list the Save Our Springs’ Alliance Bill Bunch, never one to let wounds scab over, erroneously called it a “Randi Shade supporters list,” depicting the November move as intrinsic to Lee Leffingwell’s re-election without acknowledging the fact more SOS-aligned candidates stand to gain from a low-turnout election. Mike Martinez said he was “deeply offended” by Bunch's insinuations, and then Bunch’s mic was cut.)

Political consultant Mike Blizzard raised the day’s most interesting point – that for all the talk about preserving May as a matter of fidelity to the City Charter, that argument’s a non-starter. Blizzard cited a “get-out-of-election-dates-free card” found in a 1994 charter amendment that passed overwhelmingly at the polls. Seemingly drafted as a clean-up measure meant to reconcile discrepancies between the charter-specified May election and changing state election dates, he argued that voters had already given council the discretion to change dates. Quite honestly, that always seemed like the intent of state Senate Bill 100, the legislation that put Austin in this quandary by rearranging the federal & state primary calendar. But an apt truism lay at the heart of Blizzard’s message to council: “Stop hiding behind the charter.”

So no speeches about ‘the will of the voters’ or ‘disenfranchisement’ this go-round. Bill Spelman moved to approve May elections on third reading, seconded by Laura Morrison, and the vote fell along the previous 4-3 lines: Cole, Morrison, Spelman and Tovo voting aye; Leffingwell, Martinez and Chris Riley voting nay.

Leffingwell jokingly started to congratulate the final speaker, Roy Waley, for ending his remarks on a conciliatory note -- then withdrew the gesture when Waley denounced council "pontificating." But judging from the chatter surrounding the move, today’s action was less of an end to the election question than the beginning of what promises to be an exceptionally nasty 2012 election cycle.