Among a host of providers losing all state funds 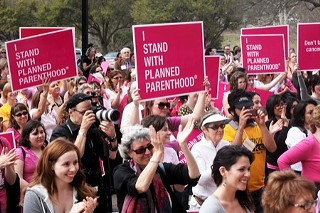 As predicted, a host of family planning providers – including Planned Parenthood – have lost all state funding as a result of lawmakers' draconian cuts to the budget traditionally used to provide low-income and uninsured women with access to basic reproductive health care.

In Austin, in addition to Planned Parenthood, funding has been cut for two other major players in women's health, People's Community Clinic and El Buen Samaritano.

The Department of State Health Services began notifying contractors yesterday of the new funding allocations for fiscal year 2012, which begins on Thursday, Sept. 1. The initial allocations only cover three months of funding, to allow for a "transition" period for contractors to adjust to the funding changes, says DSHS spokeswoman Carrie Williams. A new request for proposals for funding for rest of the fiscal year will go out to potential contractors soon.*

Six of the state's Planned Parenthood contractors, out of eight that were previously contractors to provide women's health services – including the Austin Downtown clinic on East Seventh Street – have had their funding zeroed out in this initial allocation. Others – in North Texas and in Waco – have had their funding drastically reduced. "We're still trying to figure out what this means, but none of it is good," says Sarah Wheat, interim co-CEO for Planned Parenthood of the Texas Capital Region. "It's the worst case scenario, obviously."

The reduction is likely to result in hundreds of thousands of women losing access to basic health care and family-planning services.

You can find background on the state's decision to drastically reduce family-planning funding in our April 22 story, "The War on Women's Health."

*This story has been updated to include comments from DSHS; a DSHS spokesperson was not immediately available on Aug. 26, when the story was originally posted.