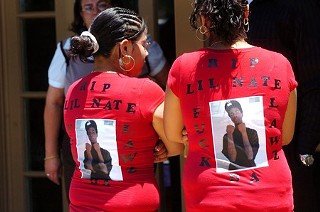 Mourners at the Sanders funeral (Photo by John Anderson)

City Council's agenda for Thursday is a densely-packed thing, including hearings on the city budget, discussion of the City Manager's performance, unique zoning cases and more. But it's the returning $750,000 settlement with the family of Nathaniel Sanders II that will likely spark the most discussion.

Items 14-18: The Law Office agenda contains several interesting settlements: Item 15 would settle Sir Smith’s lawsuit against Leonardo Quintana and the City of Austin for the wound he sustained in the Nathaniel Sanders II shooting incident; Items 16-19 pertain to a settlement between “Emergency Responders for Equality” and Fire chief Rhoda Mae Kerr regarding a “reverse discrimination” lawsuit against the chief for appointments she’s made.

Item 19: Applying for $3 million in Housing and Urban Development money for city development of their Colony Park tract.

Item 70: Also from Martinez and Riley, this item pertains to the Barton Springs Pool Master Plan, “directing the City Manager to ensure expeditious completion of plan projects underway; to work with and receive input from community groups in order to complete plan projects; and to consider including the Plan for additional funding in the next bond election.”

Item 71: Also from best-ies Martinez and Riley, this resolution calls for a “Latino Artist Incubator Program”, housed in the Emma S. Barrientos Mexican American Cultural Center, and directs the City Manager to bring back implementation specifics.

Item 78: Is it that time of year again? Item 78 is the annual “resolution relating to the compensation and benefits for the City Manager.” Prepare for a lengthy executive session.

Items 79-81: Related, this suite of items pertains to compensation and benefits for the City Auditor, City Clerk, and Municipal Court Clerk. Make that executive session even longer.

Item 82: The centerpiece of this week’s agenda: Item 82 marks the return of a $750,000 settlement agreement with the family of Nathaniel Sanders II, a year after the initial settlement proposal collapsed in spectacular fashion. Mayor Pro Tem Sheryl Cole is the main sponsor, joined by Laura Morrison and Tovo; Bill Spelman was a vote in favor of a $750,000 settlement last year, so there’s your fourth. Whether Riley – who moved for a $500,000 settlement last year (and was widely pilloried for it), before voting against the full settlement amount – will vote nay again has sparked speculation, although the item looks assured to pass. Cole tells the Hustle “It’s time to close this chapter in Austin’s history – where there’s been no villains or heroes – and move forward.”

Items 84, 85: The morning’s 10:30am briefings are comprised of a water conservation briefing from the Resource Management Commission, and a “presentation and discussion regarding options and related administration costs for a May or November 2012 election.”

Items 91-96: The city holds one of their periodic bond sales for, like, a whole hell of a lot of money.

Items 98-107: The day’s zoning agenda. Item 106, the 707 West Ave. rezoning, should prove interesting: Cirrus Logic is attempting the rezone the property from general office (GO) to general commercial services (CS), a designation approved by the Planning Commission, that Cirrus needs to house R&D work in the building adjoining its under-construction headquarters. the Original Austin Neighborhood Association has blessed the change, pending a restrictive covenant that would prohibit certain neighborly uses in the future.

Items 108-115: 6pm public hearings include public input on property taxes, utility rates and more – put whop knows when they’ll get to those. It’s won’t be 6pm, we assure you.