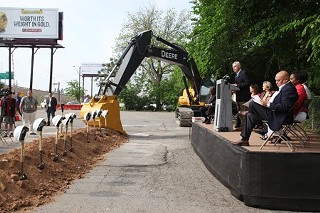 Earth moving: Council at the Waller groundbreaking in April (Photo by Jana Birchum)

With payday lending regulation and a Water Treatment Plant No. 4 item at City Council’s meeting Thursday, it’s shaping up to be a busy week. And it’s getting busier: This morning, Mayor Lee Leffingwell trumpeted the city’s latest open space acquisition. Plus: tunneling and excavation news that doesn’t involve WTP4: who knew such a thing was possible?!?

At a joint press conference with members from The Nature Conservancy of Texas, Leffingwell announced a purchase of 611 acres of land over the Barton Springs and Edwards Aquifer recharge zone. The $11.8 million purchase is largely comprised of $11.1 million in general obligation bond money, out of $50 million voters approved for open space purchases, per the city’s 2006 bond election. $400,000 in additional city contributions come from the recently approved Tarlton 360 Townhomes development, the first project under the city’s Barton Springs Redevelopment Ordinance. And an additional $300,000 comes from homebuilder Standard Pacific Homes for $300,000, which was an integral to bridge the remaining funding.

“We envisioned a dream more than a decade ago to balance development in the Barton Springs/Edwards Aquifer Recharge Zone with land conservation,” says Leffingwell in a press release announcing the acquisition. “Today we prove that we have made great progress toward the protection of critical open space.”

Council action is scheduled to finalize the deal at their Thursday, Aug. 18 meeting.

… And, believe it or not, talk of a shaft that doesn’t mention salamanders. Work on the Waller Creek Tunnel is kicking into high-gear next week – and they promise the project will play nice with Downtown traffic. Says the city:

The shaft will take approximately 4 months to build, there are no planned lane closures, and the work is not expected to significantly impact Downtown activities, though there may be increased traffic in the immediate area from hauling away materials.

Once the entrance shaft is complete, the crews will use specialized equipment to excavate through limestone in two directions until the tunnel reaches Waterloo Park and Lady Bird Lake where it will be connected to an inlet structure and an outlet lagoon. The final stage will be to line the tunnel with concrete. The main segment of the tunnel, along with the inlet structure and the outlet lagoon, are expected to be complete by the end of 2014.

Once operational, the mile-long tunnel will provide several public safety and ecological benefits, including:

* Removing 28 acres of downtown land from the 100-year flood plain
* Reducing the flood threat to 42 buildings and 12 roadways
* Reducing stream bank erosion, enabling the City to restore the stream and add future amenities such as trails
* Reducing the amount of trash in the creek
* Providing a year-round flow of water in the creek, even during dry periods