Council's WTP4 site meeting, and what's next for the waterworks 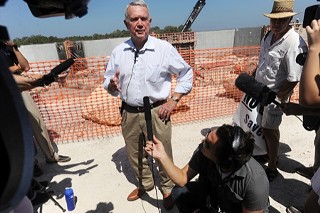 Leffingwell getting the press treatment (Photo by John Anderson)

Yesterday’s special-called City Council meeting at the Water Treatment Plant No. 4 site provided an enormous backdrop to the theater surrounding the plant construction. We’ve got highlights, such as they are, after the jump, along with reaction from a couple council members.

You can read the Hustle’s tweets from yesterday to get a sense of how the meeting went. But with only one item on the agenda – an update from WTP4 contractor MWH Construction on the plant’s progress, no public comment allowed – there wasn’t a terrible lot to report. (Unless you’re looking to purchase a WTP4 polo.) MWH’s Larry Laws said some $319 million out of WTP4’s roughly $500 million budget was under contract, and he estimated approximately 150 workers were working on the plant’s various components – clarifying pools, filters, and five million gallon storage tanks, for starters. But that number is slated to rise as builders “ramp up construction” on components including the intakes on Lake Travis, and construction of the plant’s Jollyville main.

That controversial Jollyville line may foreshadow the next chapter of debate over the plant, as Laura Morrison and Kathie Tovo spent time addressing the impact construction might have on endangered species, or “species of interest” like the Jollyville salamander – not the first time the little critter's slithered into the debate.

Reached for comment afterward, Tovo said the salamander – along with environmental protections for critters found along the Jollyville line’s underground karst formations – were “central to the concerns” she had regarding the Jollyville line, adding “it’s definitely something to be mindful of.”

Also upcoming is the estimate of construction postponement costs, which Assistant City Manager Rudy Garza told the Hustle was still on track to be presented Aug. 18. Tovo said she wants to ensure council – and the public – receives the information promptly so it could be considered in a council work session, and so council could have a “substantive dialogue with staff.”

That was a concern Bill Spelman also voiced, noting that once council receives the estimate, “at that point, the City Auditor’s staff is gonna take a look at, basically, whatever they can take a look at.” Spelman says it’s a question of “how much info we can get into the Auditor’s hands about where those estimates came from, what they’re based on, what procedures are used and what assumptions are used.”

“They’re not engineers, they’re not actually on the site,” Spelman cautions, “but to the extent of their capacity, they’re gonna prove out the procedures and let us know how much sense that makes.”

At the meeting’s end, Mayor Lee Leffingwell addressed the assembled press in front of the massive, ongoing construction – the message being it’s too late to turn back now. Whether or not Wednesday’s meeting has any impact on the ongoing WTP4 fracas, however, is still unknown.