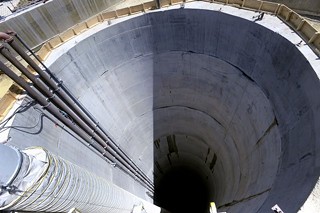 Down the rabbit hole: The scene at WTP4 (Photo by John Anderson)

The age of austerity has come to Austin.

By a 5-2 vote yesterday, the new-look City Council voted to suspend issuance of notices to proceed with construction at Water Treatment Plant No. 4 until they were presented with an estimate of the cost of shuttering the controversial waterworks for either five or ten years.

If you thought Formula One inspired controversy on the dais, you hadn't seen nothing yet.

It took hours for council to get through the item, starting with a robust discussion on the dais, followed by the usual assortment of speakers in opposition.

Mayor Lee Leffingwell took the lead in opposing the measure, spending a generous amount of time with bond advisor Bill Newman envisioning painful scenarios for Austin if the dilly-dallying on WTP4 decreased local bond ratings. One scenario held that a downgrade of Water & Wastewater bonds would mean an extra $25 million for every $100 million that the city borrows.

And while an estimate of stoppage costs – “to at least the nearest $5 million,” according to the resolution – will be forthcoming on or around Aug. 18, Leffingwell wrangled a ballpark figure from WTP4 contractor CDM, whose Steve Link said it would cost “far over $100 million” to shutter the plant. Moreover, to do so properly could take up to two years, with a similar lag expected on a restart; with a five year delay, Link said, “you'd be turning around and reopening” almost immediately.

Not that Leffingwell believed plant opponents (or, it would logically follow, the sponsors of the item) had any real interest in re-opening the plant. He told the Hustle, “Anybody that really believes plant opponents want to delay the plant, not shut it down – well, I've got some ocean front property in Arizona.” Gesturing towards a screen in the City Hall atrium showing Bill Bunch addressing council, he said “You really think these folks are gonna come back in five years and say, Go ahead?”

Sheryl Cole – who, despite her support of Tovo and ascent into the 'cool kids' club has been a steadfast supporter of WTP4 – attempted to split the difference. As arguably council's most fiscally-conservative member, she sided early in the meeting with Leffingwell in ascribing importance to the city's bond rating, raising the prospect of how a downgrade could drastically impact the city's proposed 2012 bond election. In order to assuage those concerns, she offered a revised version of the original resolution that set a firm date when “Notices to Proceed” on new plant construction could be offered again, Sept. 2.

WTP4 opponents Laura Morrison, Chris Riley and newcomer Kathie Tovo remained largely silent, with Bill Spelman doing most the talking – and finding himself repeatedly crosswise with the mayor. Spelman tried making the case that shuttering the plant could, in fact, be a positive on the city's bond ratings, by showing investors they would be “keeping our rates competitive and ensuring that our revenues and costs are in balance” without the additional debt of WTP4.

Spelman began quizzing Assistant City Manager Rudy Garza on when the Jollyville notice was signed – with the council member voicing the concern of opponents in the audience that Austin Water and its management was ramming through contracts before this newest council action. (Garza said the notice was issued Tuesday; the WTP4 item wasn't publicly posted until Friday afternoon.) This brought the sharpest rebuke from the mayor: “I want to caution you about making accusations or threats,' Leffingwell told Spelman. Spelman then asked Garza whether the Jollyville contractor could delay big equipment purchases, “if it will not put them off schedule too much.” [Kinda like being a little bit pregnant – you've got a little bit of a contract – but we digress.] Again, Leffingwell snapped that he didn't think Spelman's request was an appropriate request to be made.

Nearing the vote, Leffingwell said “I'm not gonna support this anyway ... This is an exercise that has no purpose to me.” Spelman said “I say this very rarely, but I could not disagree with you more.”

“It's not that rare,” Leffingwell joked back.

Spelman and Tovo both briefly spoke in support, before Mike Martinez – a core vote in favor of WTP4 – spoke, unloading on the process. “Intuitively, I know it's gonna cost too much money,” he said, adding “In a few weeks, we'll get this [the estimates] back, and no one's gonna agree.” He called the item “political theater” – not interested in an honest accounting, but to further opponents' cause. “You ask questions so you can find a way to give your answers,” he said. Lastly, he took shots at Spelman over his treatment of Garza, saying “I've never seen a staff member berated for working their tail off.”

The vote was 5-2, Leffingwell and Martinez the nays. The Hustle and others have speculated this process might be a way for ambitious council members to take WTP4 “off the table” before 2012's mayoral race – pressing the issue only to learn it's too costly to turn back. Before yesterday, it seemed like that was Spelman's intent – but given his hard charging performance, now we're not so sure. Certainly Cole is offering a 'third-way' in the debate, as this consistent vote in favor of the plant is now entertaining alternatives while attempting to assuage investor concerns. But in a increasingly polarized situation, it's unlikely half-measures will get her much of anywhere.