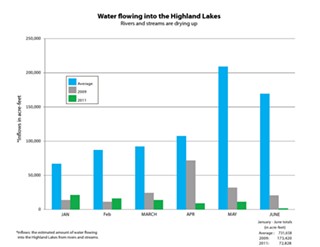 A graph of the average inflow levels and during times of severe drought, like now (click to expand) (Courtesy of Lower Colorado River Authority)

The Lower Colorado River Authority announced at its monthly drought press conference this morning that inflows into the Highland Lakes have dropped to 1% of their average flows.

For anyone who has driven on Highway 71 far enough to pass what remains of the Pedernales River, this information doesn't come as any surprise. Though there was some good news this morning; Austinites can still attempt to keep their grass green two nights a week, as lake levels have yet to hit Austin Water's trigger point for a schedule-2, one-time a week water restriction. "And this isn't the longest drought ever," reminds Clara Tuma, an LCRA spokesperson. "It's just the most intense since 2009."

As to the debate about whether this is the worst drought ever, there are a couple different ways to break it down: This year's combined lake levels at Lake Austin and Lake Buchanan have yet to fall below the five lowest of all time, though records set in each of those years were reached in their respective late summers or early falls; we're only into July. The last decade is trending in 2011's favor, as we've had more record setting low lake-level years in the top five than any other similar period. As for rainfall, the record set for the least amount of rain in a given year is still held by the year 1954, but 2011 has a fighting chance of beating that record, especially if this fall turns out to be as dry and hot as forecasters are predicting.

Finally we come to inflow, which in March of this year dropped far below 2009 levels, the most recent severe drought on record. And now today's news that inflows have nearly dried up as a result of nonexistent precipitation in the area. With 2011 lining up a strong triple threat, it's best to say that the ball is still in the air.

So the race is on to see if the underdog drought of 2011 can beat the other worst droughts ever. But what will another record drought year in a decade riddled with record drought years mean to the future of our blooming city? "LCRA is confident it can meet the needs of its firm customers, such as cities and industry, through a prolonged drought as severe as the worst one this basin has ever experienced," consoled this morning's press release. The only question is, what happens when things get worse than the worst year ever? 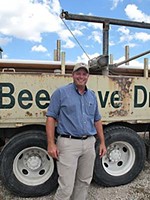 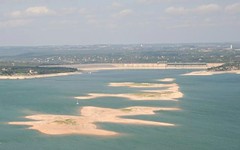 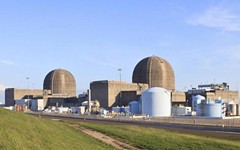