Formula One returns to a reshaped dais 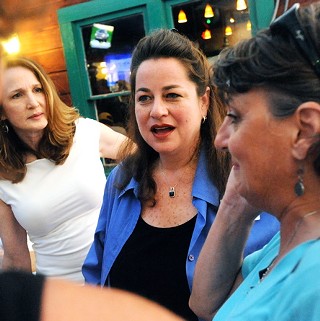 Following hours of impassioned testimony, lawyerly parsing from the dais, and more “discomfort” than a hemorrhoid commercial casting call, City Council postponed action on entering in into the state’s Formula One Major Events Trust Fund. Action’s now set for a special meeting June 29. Kathie Tovo will be on the dais. Randi Shade will not.

Considering the city’s contracts weren’t even finalized yet, postponement may be in the city's best interest. But as Bill Spelman put it to F1 attorney Richard Suttle, “some of those people are never going to be reconciled to a race. They're just plain against the race, and some of them are stalling for time.” Conversely, Suttle’s complaint that any delay could kibosh the entire multi-million dollar deal – by interfering with the local F1’s crew’s Fourth of July plans – was pretty weak.

Ultimately, the council voted 6-1 (Lee Leffingwell the only nay) to postpone the meeting to June 29, a special called meeting where they’ll take up a $4 million fee-waiver deal for hotel builders White Lodging, looking to put up a convention center hotel at the hallowed ground of Second and Congress. (City Hall chatter has it Spring condo developer Perry Lorenz has also put out feelers for a grand hotel development on land he owns directly opposite the convention center.)

That meeting will come a day after Tovo is sworn in, Tuesday, June 28. Outgoing member Shade started yesterday’s meeting with prepared remarks touching on her campaign against Tovo, proceeding with a run-off after her poor general election showing, and some of the tensions that erupted as fellow incumbents Spelman, Laura Morrison and Sheryl Cole lined up behind Tovo. That tension was still on display as Cole insisted on issuing an awkward comment on Shade’s remarks, in opposition to the outgoing council member’s wishes. Despite Shade asking Cole to take her comments “off the dais,” Cole persisted in noting Shade gave more examples of working with Morrison – who Shade frequently clashed with –  than with herself. “I want to make sure you mentioned three things that you and Laura did and only one that you and I did,” Cole said, attempting a joke. “Now you see the problem?” Shade told the chambers.

Despite the weirdness, Shade also touched on initiatives she touted, serving as the city’s first openly gay council member, and more. “This is our home and we are all engaged in this activity at City Hall because we want to make our home the best place it can be.”