Redistricting: What Is and What Could Be 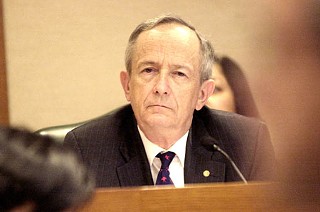 Could state Sen. Jeff Wentworth’s long-running (and long-failing) attempt to reform the Texas congressional redistricting process actually pass this time? It has at least taken the first few steps. On Wednesday, Senate Bill 22 passed the Senate on a 16-13 vote.

Wentworth, the San Antonio Republican whose district includes parts of South Austin, has been here before. “It passed the Senate in 2005 and 2007 and came within one vote in 2009,” he recalls. “So it’s not unprecedented. The challenge has always been the House.”

The bill would remove congressional redistricting from the Legislature’s hands and place it under a nine-member bipartisan commission composed of four Democrats and four Republicans appointed by the Lege, with a ninth, nonvoting president appointed by the other eight. Members could not be elected officials or candidates nor could they actively participate in political campaigns.

The special session rules made it easier for the bill to get through the Senate, since the rule normally requiring a two-thirds vote to get a bill to the floor is not in effect. During the regular session, Wentworth rounded up 18 votes, short of the 21 necessary.

Now a major question is time. The special session ends June 29, and Gov. Rick Perry keeps adding items to the call. However, Wentworth was optimistic it could be done.

In the meantime, the current incarnation of the Congressional redistricting map – with all the blatant partisanship Wentworth hopes to abolish – motored on through the Legislature this week, with the Senate agreeing to House amendments.

Now the map is ready for Perry’s signature, which would then presumably trigger at least one lawsuit, possibly more, by aggrieved racial minority groups. (View the proposed map at gis1.tlc.state.tx.us/?PlanHeader=PLANc185.)

According to Democratic strategist Matt Angle of the Lone Star Project, the map reduces the number of districts in which minorities have the opportunity to elect the candidate of their choice from 11 to 10 and increases safe and likely Republican seats from 21 to 26. If true, this means that the minorities who overwhelmingly drove the state’s population growth over the last 10 years – especially Latinos – got bupkis to show for that growth. And hence, the inevitable lawsuits. Oh, did we mention Travis County will get split into five districts?