Will Legislation Save Humberto Leal? 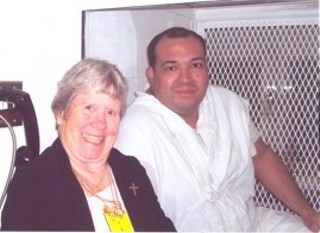 At issue is whether foreign nationals who get in trouble with the law in the U.S. are afforded the opportunity to communicate with home-country officials. Leal is one of the more than four dozen Mexican nationals on death row in the U.S. whose cases were brought to the UN's International Court of Justice in 2004. In that case, Mexico complained that in each instance the accused was not given the opportunity to communicate with Mexican consular officials. The ICJ ultimately ruled in Mexico's favor and said that the cases should be reviewed. Then-President George W. Bush penned a memo asking the U.S. courts to give effect to the ICJ ruling, but the U.S. Supreme Court ultimately ruled that state courts were not required to do so absent an act of Congress. After several years, that legislation was finally filed this week. "Compliance with our consular notification obligations is not a question of partisan interest," Leahy said in a press release. "Given the long history of bipartisan support for the [Vienna Convention], there should be unanimous support for this legislation to uphold our treaty obligations. A failure to act places Americans at risk."

That is, of course, one of the issues here: If the U.S. continues to ignore the consular notification provisions as it pertains to foreign nationals in the States, that makes it more likely that the rights of U.S. citizens abroad will also be ignored. Since the ICJ decision in 2004, Texas has executed three foreign nationals; unless the state acts to halt Leal's execution, he will become the fourth – and the first since Congress has made a move to require compliance with the Convention, and the ICJ ruling.

Leal was convicted and sentenced to die for the 1994 kidnap, rape and murder of 16-year-old Adria Sauceda in Bexar County. Among the problems with Leal's case – including bad lawyering and the use of questionable (at best) forensic science – is the fact that the Mexican national was not afforded access to consular officials. In fact, Leal didn't learn of that right until after he was already on Texas' death row, when he was given the consulate address by another inmate. Leal had never been convicted of any crime and suffers from brain damage, among other issues. The overarching theme of Leal's petition for clemency to the Texas Board of Pardons and Paroles, is that had Leal been provided the access he was entitled to under the Convention, his case very well may have turned out differently. Unless the BPP acts to recommend clemency, and Gov. Rick Perry acts on that recommendation – or issues a stay in the case – Leal will be executed on July 7. If that happens, his attorney Sandra Babcock argues, Leal will again be denied due process.

Also this week, attorneys representing Leal have filed a motion in federal court, asking it to order the state of Texas to release biological evidence in the Sauceda murder case so that it can be subjected to new DNA testing. New testing, they argue, could reveal that Leal is actually innocent of the crime. So far, the state has declined to release the evidence.

You can find more on the case here.