You may have already noticed it, but you most likely haven't heard about it; the city of Austin's first bike corral – an innovative on-street bike parking design originally pioneered in Portland, Ore. – was installed last Friday in front of Beerland, just north of Seventh on Red River.

Yet come Monday morning not a word had been issued by any of the groups involved in bringing this new facility to the streets of downtown.

The new corral is the result of several players working together, starting with talks initiated with the City of Austin by the League of Bicycling Voters Bike Parking Initiative. Since last Fall, the league has been working to overhaul the city's bike parking situation, and getting the city to provide bike corrals to business owners who request them has been an area of focus. "We're taking some credit for this one," said league executive director Tom Wald.

Around the same time, the owners of Beerland approached the city to ask for more bike parking at their already bike rack-filled store front. With the corral concept now a tool in the City's arsenal, Beerland's owners were charged with obtaining approval from the other business proprietors around them. "I told them if everyone was Kumbaya-ing, then we could go ahead with the bike corral option," said Bicycle Program director Annick Beaudet. "The bike program isn't pushing the corral option, but if people want them, they can have them."

Once given the go ahead from the neighbors, city staff including representatives from the bike program, Public Works Department and the Austin Transportation Department began designing a corral that would eventually lead to Friday morning's installation in the parking space in front of Beerland.

However none of this explains why the installation of Austin's first bike corral – a major event if you consider the normally contentious situation that is tinkering with car parking – has gone by without a single press release, blog post, or email blast from the usual suspects. Corrals in other cities around the country have been met with huge fanfare, political photo-oping and, to some degree, years of long court battles. "It's just another day in Austin," said Beaudet. "We used to joke about having the problem of too much demand, but now that's exactly what's happening," explaining that the city's main focus is now in simply meeting that demand. "We wanted to let the news come from other sources."

Pretty much the only mention of bike corrals in Austin comes from the league's Bike Parking Initiative website, with a short notice of a Summertime corral to come. Wald said, "The city is usually afraid of backlash from anything pro-bike. The ironic thing is that this time there was a large demand for the bike corral."

Will the future of Austin's growing bike network be one of quiet accomplishment and humble achievement? "You know the racks went in on Friday morning and by Friday night the business owner had sent me a picture of the corral completely full," said Beaudet. If anything, one can still suppose that actions speak louder than words. 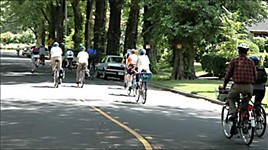