The weekend is upon us: time to kick back, relax, and navigate a hellish maze of street closures. We’ve got updates on closures in West Campus, on Riverside, and construction along South Congress that's troubling to some SoCo storeowners.

South Congress construction has been underway for a few days already. The city has more details:

The first phase will begin at the southern most point of the project at Oltorf, and move north to Annie Street. The street will remain open to traffic, but with daily temporary lane closures in the work zone. In an effort to minimize the impact to traffic, the northbound lanes will be closed from 8:30 AM to 7:00 PM; with southbound lane closures from 7:00 AM to 4:00 PM.

On-street parking in posted work zones will be prohibited during these times. Drivers are advised to follow any construction and lane closure signs and any directions from flag persons or police officers.

This first phase of resurfacing will also include work on the intersections along South Congress from Oltorf to Annie, with repaving going approximately 30 to 70 feet into the side streets. The City encourages those leaving the neighborhoods to plan ahead accordingly for possible construction delays.

The work consists removing about 3 inches of old paving and replacing it with newly paved surface.

City plans for reverse angle parking, similar to Dean Keeton by UT campus, have some business owners worried. In one of his characteristic e-mail blasts, former Texas Monthly publisher Mike Levy forwards an e-mail from Brandon Hodge, president of the South Congress Merchant Association, to Statesman reporter Ben Wear, who recently wrote about the project’s installation of the parking spaces. Hodge claims merchants are “universally opposed” to the change, writing “After researching dozens of other cities nationwide with reverse angle parking that limit its use to 25 mph and 13,000 vehicles per day, CoA Transportation is still forcing this down our throats, despite our higher speed limit, and a traffic count exceeding 27,000 cars per day -more than double the traffic count of any other American city street with this type of parking. As you can imagine, we are not pleased, and we'll let you know when the accident stories start breaking when S. Congress tourists unfamiliar with RAP don't ‘get’ it, and people start getting hurt as a result.”

Guess we shouldn’t be surprised, since parking on South Congress has been a big deal as long as the Hustle can remember, with business owners like Güero's Rob Lippincott even helping kill a rail election in 2000. The question here is whether it's safer pulling out into SoCo traffic (as drivers do now), or backing in.

But wait, there’s more! A temporary closure this weekend will bottleneck part of the West Campus. Per the city:

The intersection of Rio Grande Street and 24th Street will be closed the weekend of June 3rd, 2011 for utility work related to the Rio Grande Street Reconstruction project. Closures will begin on Friday, June 3, at 9:00 a.m. and continue through Monday, June 6, at 6:00 a.m.

And while that project’s temporary, construction along Riverside with congest the South First area for some three months.

Riverside Drive just west of South First Street will undergo reduced lanes of traffic for approximately 90 days, beginning on the evening of Sunday, June 5, for work related to the Downtown Wastewater Tunnel. Reductions will be around the clock until project completion and will include the reduction of east bound traffic to one lane and west bound to two lanes from the Riverside Drive traffic circle to the intersection of South First Street. Construction is projected to be complete approximately September 2, weather permitting. The Downtown Wastewater Tunnel is being built to provide sanitary sewer service for downtown development.

Digital Drag Review: Boiz of Austin’s “Are the Straights Okay?”
The Boiz revel in heteronormative absurdity 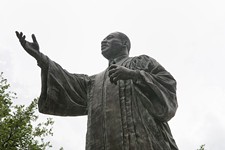