Imagine No Austinites in Congress 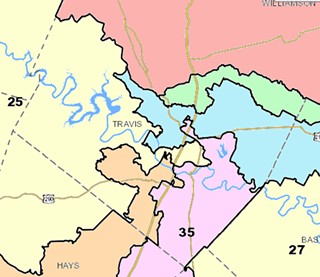 The congressional map currently being considered by the Senate would carve up Travis County five ways.

Austin currently has two residents in Congress. Due to the way congressional districts were drawn in 2003, it's been possible that we could have none, but with Dist. 25 anchored in Travis, it's been a safe bet we'd have one. But under the redistricting map currently being considered, the odds are greater than ever that we could have zero.

The latest congressional map drawn by Senate Redistricting Chair Kel Seliger is Plan C130, which may be viewed on the state's DistrictViewer site, is presumably the one that will end up on the Senate floor. Much has been made of the fact that Seliger, R-Amarillo, and House Redistricting chair Burt Solomons, R-Carrollton, want to divide Travis County five ways (see attached map).

That's enough of an abomination in itself, even worse than the three-way split that currently plagues Austin, but in yesterday's House Redistricting Committee, Travis County Intergovernmental Relations Coordinator Deece Eckstein pointed out something truly disturbing: Unlike today with CD25, none of the five proposed districts would have Travis County as a majority of its population. Put another way: There would not be one single district with Travis County as its anchor.

Eckstein calculated these numbers for what portion of each district would be Travis County residents:

Now, realistically, Rep. Michael McCaul of Austin, who has served since 2004 after the current CD10 was created, will likely be reelected – although it's worth noting that his very conservative voting record is completely out of step with strongly Democratic Austin, and McCaul has consistently lost in the Travis County portion of the district.

And if Democrat Lloyd Doggett moves into the new CD35 – he said "I'm ready to live in a Winnebago if that's what it takes" – he'll have a good shot at winning. But there's no guarantee – CD35 would run from southeast Travis down into the heart of southeast San Antonio, and there are certainly ambitious San Antonians eyeing a seat in Congress.

"That district as drawn is probably attractive to no less than half of the Bexar County delegation from the [state] House," state Rep. Trey Martinez Fischer, D-San Antonio, told the Austin American-Statesman. "Congressman Doggett is certainly a respected elected official who has enjoyed a respected career. But politics is politics."

This morning in the Senate Redistricting Committee hearing, Austin Sen. Kirk Watson repeated Eckstein's numbers, noting that Austin is being used as nothing more than a population source to fill out districts anchored in other cities or rural regions.

"Travis County citizens shouldn’t be the salvage yard of congressional redistricting," Watson said, to loud applause from many in the hearing room.