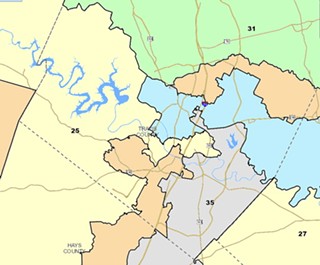 Appalling, isn't it? Click on Travis map to open an image gallery with the statewide map

The congressional redistricting map has finally been released by the chairs of the Senate and House redistricting committees, and it's even more appalling that Lloyd Doggett's worst nightmares – it divides Travis County five, yes five ways. And worse yet for Doggett, it puts him in a very Republican district. See Travis map at right.

The Legislature failed to approve new Congressional districts during the regular session, which ended yesterday. Gov. Rick Perry did not put SB 4, the new Congressional redistricting bill, on the call for the 30-day special session that began today, but he can add it at his whim. He said he would do so if lawmakers came up with a map that could get quick and easy passage. (UPDATE: Perry added redistricting to the call Tuesday afternoon. See public hearing info at the end of this post.)

Doggett will probably need to consider moving once again to keep himself electable. When Republican map-drawers yanked District 10 out from under his house back in 2003 – a move deliberately designed to drive the liberal Doggett from office – he moved to east Austin and won the then-new District 25.

Once again, his district has been radically redrawn – now Dist. 25 slices through a narrow swath of central Austin and then out into the conservative Hill Country before swerving back to the area just south of the DFW Metroplex. The precincts that would now be in that district voted 55% for Gov. Rick Perry in 2010, and only 41% for Democrat Bill White.

Doggett's best bet would be to move into the new District 35, which stretches from east Travis down I-35 and then knifes into San Antonio. In 2010, the precincts included in 35 went 57% for White.

UPDATE: The Senate Redistricting Committee has scheduled a public hearing on this map for Friday, June 3, at 9am, in room E1.016 in the Capitol Extension.