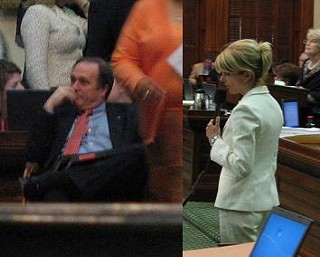 The Republican leadership was complicit in Davis' killing of the bill: They yammered on with various lesser items until around 10.30pm, knowing that Davis only had to keep going until midnight to time the bill out (think how convenient it is for them to not have an SB 1811 vote on their resume.) The House had already voted it out 84-63, with a fascinating mix of Tea Partiers and moderate GOPers voting with the Democrats against a 300 page bill. In reality, no-one knew what was actually in that bill, because they had less than a day to go through it. This bill, as Rep. Sylvester Turner, D-Houston, repeatedly noted was carved up in a conference committee out of two bills that had never seen floor debate.

A handful of GOPers were running around the House last night saying Dems will string Davis out to dry because she has opened the door to the "Sanctuary Cities" bill returning, but that is horse pucky. If Gov. Rick Perry wanted a special session on sanctuary cities, he would call it.

That would all depend on what he thinks the politics are for his presidential run. That is why he wants a congressional redistricting session and a Texas Windstorm Insurance Association special.

Why those two? US Rep. Joe Barton has already filed suit over the failure of the Lege to pass congressional redistricting, and Perry is obviously desperate to avoid having Barton vs Texas in the courts while he's in Iowa. On the other hand, he wants to make political points out of Steve Mostyn, the big Democratic donor representing the coastal chambers of commerce in the negotiations (so the way to do this is to up Mostyn's billable hours and make him look like the guardian of the coast? Nice work.)

The reality is that Perry will call a special session on whatever he wants, and the only reason he would have to is because the GOP supermajority in the House and majority in the Senate botched the session. If they had got a school finance proposal to the floor more than two hours before the close of the debate on the 139th day, then a filibuster would have been impossible. Now they are coming back (or just not leaving) with the full knowledge that every local newspaper, ISD, PTA and chamber of commerce knows exactly how badly they will get screwed by the school finance cuts.

So, in reality, Davis may have opened the door for the legislature to get a real talk on its real top priority: How hard it wants to hit kids.