The latest variation on Austin's endless dance with geographic representation might be summed up by the old Albert King lyric, “Everybody Wants to Go to Heaven, but …” On Saturday, May 21, a couple of dozen people gathered at the Carver Library on East 11th for a forum on single-member (or “geographic”) districts for the Austin City Council, the event sponsored by the Austin Center for Peace and Justice (chaired by Rudy Williams) and (nominally) by the local (District XII) chapter of the League of United Latin American Citizens, who did not appear to be formally represented.

Summing up two hours of discussion, one participant put it: “Everybody in this room is all in favor of SMDs, but not in favor of any particular map.” Of course, every previous attempt (six) by the city to adopt single-member districts has foundered on the details – and more finally, in the voting booth.

Among the folks addressing the latest nascent attempt to roll the SMD ball up the electoral hill were a familiar group of miscellaneous activists. Williams chaired the meeting with assistance by Debbie Russell and Roscoe Overton of ACPJ, who took a lead role in the discussion; in the audience was retired political consultant Peck Young (“I’ve been working on single-member districts since the Seventies”), now director of the Austin Community College’s Center for Public Policy and Political Studies; Steven Aleman of Austin Neighborhoods Council turned up, as did Eastside activists Daniel Llanes, Ora Houston, and Steve Speir; Skip Cameron of the Bull Creek Foundation arrived, curiously hoping (in vain) to turn the discussion against urban rail; former local candidates Fidel “Ace” Acevedo, Sam Osemene, and Josiah Ingalls put a word in, as did current City Council Place 3 candidate Kathie Tovo (briefly, en route to a Capitol rally for public schools). Although there was little dispute about the need for geographic council districts, the group was divided about both the specific aim and the process to get there. Young began by denouncing the “6-2-1” plan recently initiated by Mayor Lee Leffingwell, saying that to support it, “I presume you don’t want African-Americans to have representation,” because so few seats would make it impossible to draw a district that would elect a candidate chosen by black voters “unless he shoots his opponent.” Young contended it would take at least 10 districts for sufficient black voter density for that purpose; other demographic analysts have argued that with current African-American percentages and residential dispersion, it would take at least 14 districts to do the job. Russell echoed Young, “To go down to six is ludicrous.”

The council is, of course, functioning with seven members now, and for a couple of decades has included at least one African-American member – although in the current at-large system, it could be argued that he or she has not necessarily been the first choice of African-American voters.

The mayor’s proposal includes two at-large council members as well as the mayor (the “2-1”), and opinion was divided whether there should be any at-large, or in variation, “super-district” members (e.g., elected by half the city). Some objected that super-district or at-large members would create a new layer of elected officials potentially more powerful than the members from smaller districts; others suggested such a system would help obviate purely “ward” politics (one of the conventional arguments against districting). Young eventually briefed a “10-2-1” plan first floated recently by ChangeAustin, and only grudgingly acknowledged that the two “super-districts” (split at the middle of the city) were added as a supposed concession to the “business community” and its presumed opposition to districting. Others complained that splitting the city would perpetuate the historical and much-lamented East-West divide, and suggested north-south, or quadrants, or other variations.

There was also some discussion of the potential adoption process, whether maps or petitions should be presented to council, whether only an “up-or-down” vote on districts would be more effective, whether the group should push for a fall, spring, or a fall 2012 charter election – all of which matters will also be subject of the council’s own discussions of SMD’s over the next few months, probably including the creation of another task force or commission to gather public input. There was some passing discussion of the cost of campaigns; Williams complained that at-large elections would largely be funded by the wealthy instead of “the people”; but later Young argued that Austin’s stringent campaign finance rules (authored by ChangeAustin predecessor Austinites for a Little Less Corruption) have directly undermined turnout, because voters aren't even made aware that there’s an election. “You don’t get turnout without paying for it,” Young said.

In short, the forum recapitulated and left unresolved virtually every argument concerning SMD’s heard over the last decade. From this particular group, the discussion was glazed with a generic political cynicism that occasionally turned personal. The local legislative delegation has resisted a state imposition of districting, it was pointed out, but somebody suggested working with state Sen. Kirk Watson on potential maps. “Forget Sen. Watson,” barked Llanes. “He’s a racist.” Young similarly dismissed city demographer Ryan Robinson with a confounding metaphor, “I wouldn’t trust Ryan Robinson if I had to heave him through a door,” prompting a spirited defense from Speir.

Oddly enough, virtually no discussion was devoted to the singular obstacle facing geographic districts in Austin – no matter how designed and endorsed, city voters have consistently rejected the idea. It did not seem to occur to anybody in this group – fairly uniformly devoted to denouncing elected officials as incompetent, corrupt, or both – that they were also anticipating asking Austin voters to multiply the number of those officials. 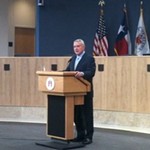 The Daily Hustle: 2/25/11
Leffingwell shares the State of the City 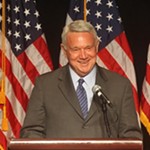 The Daily Hustle: 2/24/11
More with the mayor on single-member districts