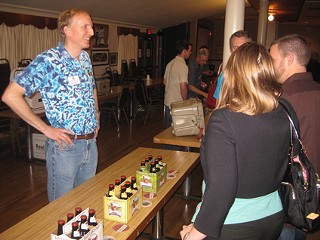 Texas microbrewers may have felt a bit hammered a week ago when a bill to help them promote their products, which seemed headed for passage, suddenly ran into opposition from the Anheuser-Busch brewing giant. But today, House Bill 602 was moved out of the Senate Business & Commerce Committee with no amendments.

Texas microbrewers have long desired the right to sell their products on the premises of their breweries – a privilege already granted to wineries – but opposition from a powerful alcohol distributors lobby always stifled legislation allowing it. The Wholesale Beer Distributors of Texas feared any changes to the "three-tier" system that legally separates producers, distributors, and retailers.

HB 602 is a compromise – it still bans true retail sales, but would allow small breweries to give away up to 144 ounces of their product to a brewery visitor at the end of a paid-admission brewery tour.

Language was added limiting the privilege to only breweries producing less than 75,000 barrels per year in order to get WBDT on board, but last Wednesday, Anheuser-Busch objected to that amendment, saying it unfairly discriminated against big breweries. And as one of the world's largest breweries, including a facility in Houston, you can guess what kind of clout A-B carries. The bill, which had already passed the House, was pulled down by its Senate sponsor for further discussion.

The bill, including the production cap, has now been recommended for the "Local & Uncontested" calendar in the Senate.

"I thought the bill was dead," said Brock Wagner of Houston's Saint Arnold Brewing, one of the leading proponents of HB 602. "I'm cautiously optimistic. I hope it continues moving forward with no baggage to weigh it down."

Wagner said his first foray into pushing legislation has been a bit of an emotional roller coaster. "I just want it to pass so I can go back to making beer."

If and when we find out what caused the bill to get unstuck, we'll update this post.

UPDATE: A spokesman with the office of bill author Rep. Jessica Farrar said the bill is not out of the woods yet. "The concerns Anheuser-Busch has still stand as far as we know," he said. "Nothing changed, it's just that a decision was made to move forward. The recommendation for local and uncontested is just a recommendation, much more so than in the House." The bill, he said, could still end up on the "intent" calendar and debated because "some senators are not fully convinced."

We've placed a call to Anheuser-Busch.