Splits Travis four ways, but not exactly as Doggett predicted 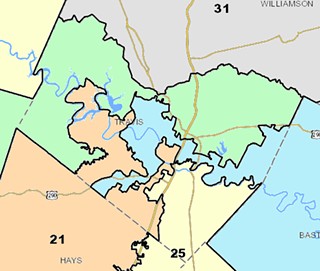 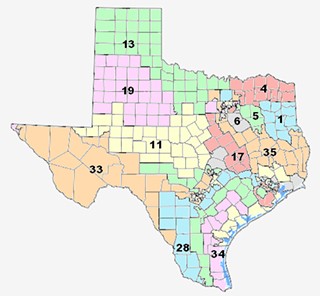 The first official proposal for Congressional redistricting has been released. PlanC117 by Rep. Jodie Laubenberg, R-Parker, does indeed split Travis County up four ways – just as Austin Congressman Lloyd Doggett suspected, but with different boundaries from the map he uncovered on April 28.

The Senate Redistricting Committee will hold a public hearing on Congressional redistricting Thursday morning at 9am, in the Capitol Extension Auditorium (Room E1.004). [UPDATE: THIS MEETING HAS BEEN CANCELED. NO WORD YET ON WHEN IT WILL BE RESCHEDULED] Since it's a Senate committee and not House, the committee will presumably be looking at its own map, but it's possible they'll be looking at one identical to Laubenberg's.

UPDATE: I'm now told by the Texas Tribune's Ross Ramsey that it's too late for this map to be heard by the House redistricting committee, and in the Senate, Redistricting Committee Kel Seliger has his own map, so I guess Laubenberg's map is going nowhere.