The Scene at Scholz 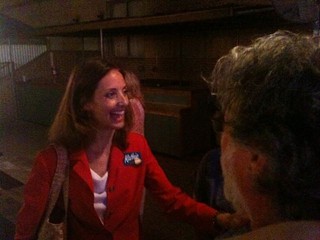 It makes sense that the Laura Morrison (Place 4) and Kathie Tovo (Place 3) campaigns both ended up at Scholz Garten – the crowd of supporters definitely overlaps, and has been bouncing from the party room (LM) to the outside patio (KT) for a couple of hours.

Hard to tell who’s happier at the moment. Still waiting on election day updates, Morrison is winning in a walk at 70% against underfunded and underknown challengers Eric Rangel and Toby Ryan. That was expected, and Morrison and a group of friends (among them former state rep Ann Kitchen) celebrated with a couple of spirited rounds of tap-dancing. Introduced by David Butts as the “Sultana of the Environment” among other glowing epithets, Morrison thanked the voters, her campaign team, her council aides, and anybody else within earshot. She said her next term would focus on “equity and opportunity.” The crowd applauded loudly, but thinned out fairly quickly – many of them moving outside to join the Tovo supporters.

Outside, the Tovo celebration was a bit smaller but similarly effusive, when early returns showed the challenger up by nine points (43%-34%) over incumbent Randi Shade. Both Tovo and her campaign manager Mark Yznaga credited the voters’ “desire for change” at City Hall as the catalyst of her lead. Tovo called the early results “fabulous” and said they make clear that the voters are “ready for a change in direction.” While declining to predict tonight’s outcome, she said it’s “looking very good” that she’ll be in a runoff with Shade (Max Nofziger and Kris Bailey split the rest of the vote). Tovo said citizens had let her know on the campaign trail that they want a council that “listens and respects them, that hears their ideas and input, and wants to hear their experiences” of living in Austin. “People are suffering financially, and affordability is a central issue, as are neighborhood schools.” She said there are both short and long-term strategies the council needs to work on to help in these areas, and that there needs to be stronger leadership to accomplish them.

Asked about the overall low voting turnout – the final total will likely be about 7% of the registered Austin voters – both Morrison and Tovo said that while there may be many reasons for it, city officials and the whole community needs to do more to encourage people to get involved in local government and to vote.