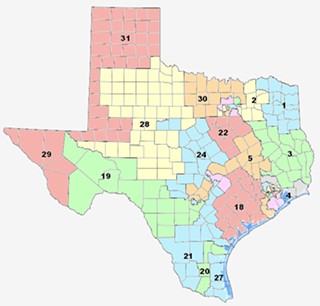 Clearly, Austin Congressman Lloyd Doggett's fears that Travis County might get split four ways in congressional redistricting are not paranoia: A map of proposed state Senate redistricting released this afternoon does exactly that, threatening Austin Sen. Kirk Watson and pairing some Austinites with cities as distant as Abilene and Laredo.

We've posted three screen shots to the right. The visible one zooms in on Travis County, as well as Bastrop County, which would be pulled into Watson's District 14. If you click on that map, it opens up an image gallery – roll your mouse over the right side of the image until an arrow appears, click on it, and you'll see the statewide map. Click it again, and you'll see a map of the current Dist. 14. (An interactive version of the map can be found on the Texas Redistricting website under "District Viewer.")

As you can see, only one thing remains somewhat constant from the current districts to the proposed ones: Parts of southern Travis would still be represented by San Antonio Republican Jeff Wentworth in Dist. 25.

But Dist. 14, which currently occupies the remainder of Travis and is completely contained within the county, would lose much of its territory in southeast and southwest Travis, and cover Bastrop County.

The heavily Hispanic southeast Travis would now find be in District 21, along with Laredo and the northern shore of Corpus Christi Bay. Southwest Travis residents would be matched up in Dist. 24 with much of the Hill Country, which isn't necessarily unreasonable, but less explicably with Temple, Killeen, Abilene, and Stephenville.

The split would appear to violate the principle that counties should be divided as little as possible, but Senate Redistricting Committee Chair Kel Seliger says it's necessary.

"District 19, Dist. 21, and Dist. 26 are all underpopulated," says Seliger. "So as we populated those districts, it had to be done very carefully, because they're all performing districts under the Voting Rights Act."

The VRA mandates that, wherever possible, the rights of racial minorities to elect the candidate of their choice must not "retrogress."

"So it wasn't a question of just getting the numbers right, it was making sure that the percentages of, we used in this case Hispanic voting age population and Spanish surname voter registration, which is probably an even better indicator," says Seliger.

Watson disagrees with Seliger's analysis. He released the following statement:

It’s unfortunate that we are just now – so few hours before a critical legislative hearing, and less than three weeks before the end of this legislative session – seeing a map that will impact the lives of people in Travis County so profoundly.

For decades, minority voters have successfully joined in coalition with like-minded others to elect the candidates of their choice. There is no good reason to divide this coalition – just as there is no good reason for Travis County, which easily has the population and communities of interest to entirely contain one Senate district – to be split up in this way.

The proposed District 14 maintains Travis County and the City of Austin as an anchor. This part of the proposed district is one I know well, and the people know me. I have represented and worked for these parts of Travis County, in one capacity or another, for almost 15 years. And I have deep friendships and relationships in Bastrop County. If this map holds, then this is a district I will run and win in.

But this isn’t about me.

This is about the people of Travis County, who may soon be divided yet again for no good reason. And this is about a process that has excluded them.

The map will be debated tomorrow (Thursday) in the Senate Redistricting Committee at 9am, in the underground Capitol Extension Auditorium, room E1.004. Public testimony will be taken at 1:30pm or upon adjournment of the Senate. The committee is also scheduled to discuss the map again, as well as the House districts map, on Friday morning in room E1.036 at 8am.