Has Doggett Found the Four-Way Map? 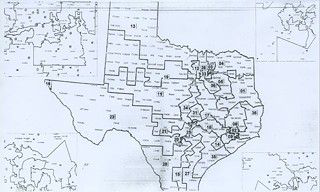 This is how Doggett says Republicans plan to carve up Travis. Click on the image to see the statewide map.

Austin Congressman Lloyd Doggett warned Travis County residents last week that he'd heard descriptions of a map to further gerrymander the county into four Congressional districts, even worse than the ridiculous three-way split we currently have. Today, he announced he's seen what may be the actual map and sent out copies (See graphic).

In a statement, Doggett wrote, “I believe that the attached represents the map for Travis County and of Texas submitted by [Rep. Lamar] Smith, [Rep. Michael] McCaul and their Republican colleagues. In reviewing the map of the outrageous twists and turns of the knife they apply to slice up our community, I certainly understand why they have hidden the map and refused to respond to questions. They prefer as little attention as possible on their going Tom DeLay one better with a divide-and-conquer strategy targeting Austin."

Smith and McCaul, of course, are Travis County's other Congressmen, both Republicans. In the infamous 2003 re-redistricting led by former U.S. House Majority Leader (and now convicted felon) DeLay, Doggett's share of Travis County and Austin was lessened, Smith's was made larger, and McCaul's seat was created. Before that, Doggett represented almost all of Austin.

Smith and McCaul have refused to grant interviews on redistricting, instead only providing short printed statements.

According to the Fort Worth Star-Telegram, "Smith has forwarded a proposed map that includes two new Hispanic districts – the one in North Texas and another in Central Texas – to the state House Redistricting Committee chairman, Rep. Burt Solomons, R-Carrollton, according to congressional sources who spoke under condition of anonymity due to the sensitivity of negotiations." The Star-Telegram also said Rep. Joe Barton is the only Texas Congressman who has objected to the map, because it's not Republican enough.

Doggett has specifically charged McCaul with being on board with the map. "Congressman McCaul is not in charge of drawing the maps, nor has he advocated dividing Travis County more than it already is," replied McCaul spokesman Mike Rosen.

Click on the close up of the Travis County picture above, and you'll see the entire state map. McCaul's Dist. 10 would stay essentially the same. Doggett's Dist. 25 would stretch down I-35 to San Antonio, presumably to be labeled a Hispanic opportunity district. Lamar Smith's Dist. 21 would take Hays County away from Doggett, give up western Travis, but take some parts of southern Travis. And a new District 34 would stretch from western Travis out into the Hill Country one way and, absurdly, up to the Fort Worth area in another.

Austin's other congressman, John Carter (who represents the Williamson County portion) would see his district shrunk from its current seven counties to just two, Williamson and Bell, reflecting the huge growth in those two counties.

"Armed with a computer and a knife, they have sliced up Travis County into four districts, including a new one that has separate fingers extending over 150 miles each, in different directions, to combine parts of South and Central Austin, which I currently represent, with dissimilar communities like Weatherford, Gatesville, and Junction," Doggett wrote. "Their map of Travis County looks like a whirlpool, designed to drown out a voice for our community values in Congress.

"It does a real disservice to families there and in both Austin and San Antonio by needlessly creating regional competition, doubling the cost of campaigns, and reducing accountability and accessibility.”

Ultimately, while the Congressional delegation can submit maps, they are officially only suggestions – the final maps must be approved by the Legislature. CORRECTION: A previous version of this post said that if the Lege fails to approve a map, then that duty would pass to the Legislative Redistricting Board, composed of the lieutenant governor, speaker of the house, attorney general, comptroller, and land commissioner (all Republicans). However, we were reminded by texasiconoclast.com that the LRB only steps in for state Senate and House redistricting. If Congressional redistricting isn't settled in the regular session, then it must either be resolved in a special session of the Lege (as happened in the infamous 2003 re-redistricting) or the courts. 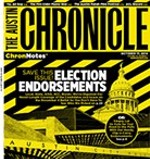