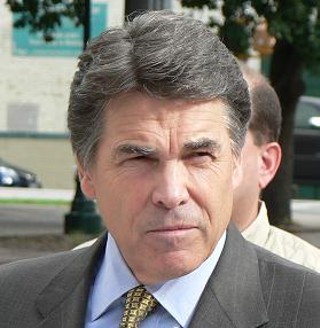 Gov. Perry: Rumors that he will use the "Rain, Rain, Go Away" defense during future flooding unconfirmed so far (Photo by Richard Whittaker)

This straight from the "How is it we are not making this up?" files: Gov. Rick Perry has declared this weekend Days of Prayer for Rain in Texas. Well, that's cheaper than coming up with real water policy.

Obviously you are currently checking the date but, no, this is not a delayed April Fools story. It's on his website.

In an accompanying statement, Perry said, "It is fitting that Texans should join together in prayer to humbly seek an end to this ongoing drought and these devastating wildfires."

What makes this particularly galling is when he goes on to ask Texans to pray for "the safety of the brave firefighters and emergency management officials who have worked tirelessly to protect lives and property around the state." This would mean something if Perry's people had not stood in the way of a measure that would have improved the safety of exactly those firefighters.

It is not just that the current wildfires, which have destroyed over 1.5 million acres and killed two firefighters, are so huge: It is that Texas is increasingly building housing outside of cities. Unincorporated areas are very attractive to developers because there is usually lots of space and fewer regulations. However, there are also fewer hospitals, fewer police, and fewer firefighters. That means less equipment, fewer fire stations, and worse response times.

Texas had a chance to fix that two years ago, and Perry was at least passively part of the effort to squash that fix.

Back in 2009, now former Travis County Democratic state rep Valinda Bolton authored House Bill 3477, a measure that would have allowed those hugely overstretched rural emergency service districts to hold short-term tax elections for desperately needed infrastructure. The sole purpose was to cut response times and give them a better chance to fight exactly this kind of fire. It is interesting to note that, when the accompanying House Joint Resolution 112 came up in committee, every witness spoke for the bill – except for Michele Greg of the Texas Apartment Association. Somehow, the bill still failed, and word at the time was that the governor's office was pleased that even a vitally needed and broadly supported 'tax' bill sputtered out.

If it had passed, then it would have given ESDs the ability to ask voters to give them more resources to fight wildfires in unincorporated areas. It would also have meant more infrastructure in place like Oak Hill, which was severely damaged by fire this weekend, when they are incorporated.

When asked about the bill's demise last year, Perry said he did not know about the specifics. However, during the 2009 session it was pretty clear to everyone that HB 3477 was squashed as part of the general anti-tax, anti-public investment rubric coming out of his office.

So now Perry's solution to out-of-control wildfires caused by a massive and ongoing drought (ssssh don't mention climate change) is prayer. Maybe we should be praying for longer hoses.

Seriously, you need to read this proclamation.

TO ALL TO WHOM THESE PRESENTS SHALL COME:

WHEREAS, the state of Texas is in the midst of an exceptional drought, with some parts of the state receiving no significant rainfall for almost three months, matching rainfall deficit records dating back to the 1930s; and

WHEREAS, a combination of higher than normal temperatures, low precipitation and low relative humidity has caused an extreme fire danger over most of the State, sparking more than 8,000 wildfires which have cost several lives, engulfed more than 1.8 million acres of land and destroyed almost 400 homes, causing me to issue an ongoing disaster declaration since December of last year; and

WHEREAS, these dire conditions have caused agricultural crops to fail, lake and reservoir levels to fall and cattle and livestock to struggle under intense stress, imposing a tremendous financial and emotional toll on our land and our people; and

WHEREAS, throughout our history, both as a state and as individuals, Texans have been strengthened, assured and lifted up through prayer; it seems right and fitting that the people of Texas should join together in prayer to humbly seek an end to this devastating drought and these dangerous wildfires;

NOW, THEREFORE, I, RICK PERRY, Governor of Texas, under the authority vested in me by the Constitution and Statutes of the State of Texas, do hereby proclaim the three-day period from Friday, April 22, 2011, to Sunday, April 24, 2011, as Days of Prayer for Rain in the State of Texas. I urge Texans of all faiths and traditions to offer prayers on that day for the healing of our land, the rebuilding of our communities and the restoration of our normal way of life.

IN TESTIMONY WHEREOF, I have hereunto signed my name and have officially caused the Seal of State to be affixed at my Office in the City of Austin, Texas, this the 21st day of April, 2011.

As Daily Kos contributing editor David Waldman put it on Twitter, "If you're thinking of pissing on Rick Perry's leg, please do feel free to tell him it's raining."